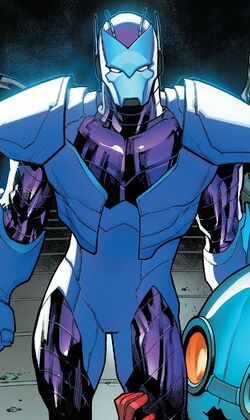 The Orphan-Maker, whose real name appears to be Peter, was rescued by the cyborg known as Nanny from captivity by Mister Sinister. Sinister had apparently been planning to exploit Peter's abilities for his own ends, but instead decided that he couldn't control him and decided to kill him. Peter has commented that Nanny found a way to keep him from growing into what he would have become, but it is not clear what he meant by this comment.

Nanny believed it was up to her to protect mutant children from the dangers of the world around them. She made Peter her accomplice in this task, outfitting him with an armored battle suit and weaponry. Their modus operandi was to abduct mutant children and battle anyone who got in their way, including killing the children's parents. For this reason, Peter became known as the Orphan-Maker.[2][3]

Along with Nanny, the Orphan-Maker has battled members of the X-Men,[4] X-Factor,[5] the Avengers,[6] Generation X,[7] and the Fantastic Four.[6]

Right after the Decimation, when the students were sent back from the Xavier's School for Gifted Youngsters to their homes, Peter and Nanny resurfaced, intending to abduct Trance. They battled Wolverine and were eventually defeated by Trance.[8]

After a quick battle with the X-Men, Peter & Nanny came to live on Krakoa. Afterwards, they were inducted into the Hellions for mutants whose mutation made them problematic to deal with and live in civilization. On their first mission, they were sent to destroy the State Home For Foundlings, which was a front for a Marauders cloning farm. While he and Nanny were being beaten by the perverse, zombie-like Marauders, they were rescued by his fellow teammates, who completed the mission.[9]

During the X of Swords contest, Mister Sinister proposed to the Quiet Council of Krakoa that the forfeiture of the Swordbearers of Arakko be arranged by stealing their swords with the help of the Hellions and the proposal was granted. The Hellions reached Avalon and headed to Arakko to steal their swords. But later it was revealed Mister Sinister led the hellions here to collect Mutants DNA and Tarn the Uncaring appeared with his Locus Vile. In an attempt to steal their DNA by Sinister, Locus Vile attacked the Hellions and killed Nanny and Peter both. [10]

After his resurrection in Arakko, he came back stronger and different, no longer accepted as the little boy Nanny raised, he turned away from her and decided to grow up, even going by "Pete" now.[1]

His powers are currently unknown, though his armor being breached by the Marauders caused him to begin spewing an unidentified caustic liquid that melted Scrambler's face.[11] After his resurrection in Arakko, his physique, personality, and powers have all matured.[1]

The Orphan-Maker's armored battlesuit apparently enhances his strength, at least enough to enable him to bear the weight of the armor.

The Orphan-Maker has the emotional and intellectual level of a small child, though whether he is actually a child or an adult with developmental problems is not known.

The Orphan-Maker wears an armored battle suit created by Nanny that affords him high resistance to physical damage, even including Cyclops' optic blasts.

Like this? Let us know!
Retrieved from "https://marvel.fandom.com/wiki/Orphan-Maker_(Peter)_(Earth-616)?oldid=6075324"
Community content is available under CC-BY-SA unless otherwise noted.