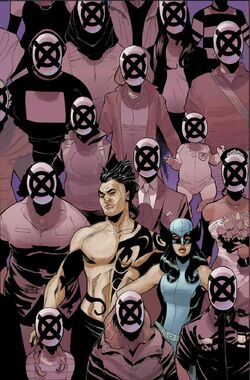 The Orphans of X are an organization of individuals who have lost loved ones or been directly victimized by Logan, Lady Deathstrike, Wolverine, Sabretooth, and others with similar powers. Having resolved to rid the world of all mutants like them.[1]

They were originally a support group for people who were negatively affected by those same individuals and the various organizations who enabled their killing sprees. Initially gathering to talk and share stories of their tragedies. After the events on Roosevelt Island, seeing Laura Kinney honored as a hero infuriated Henry Sutter, to the point that he radicalized their gathering into a covert funded operation resigned to wipe them out entirely, militarizing the group and its associated connections in the process.[2]

Because the Orphans of X have members throughout the world, ranging from regular citizens, to a rogue lieutenant within the Hand,[3] and even governmental or military personnel,[citation needed] they are well-equipped with or have access to a wide array of weaponry, vehicles, and other equipment.

Like this? Let us know!
Retrieved from "https://marvel.fandom.com/wiki/Orphans_of_X_(Earth-616)?oldid=5549423"
Community content is available under CC-BY-SA unless otherwise noted.