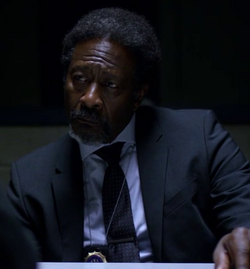 Detective Oscar Clemons was assigned to the Hope Shlottman murder case after the girl killed her parents. He interacted with Jessica Jones, the private investigator hired by the Schlottmans to find their daughter. Clemons recognized that Jones wasn't telling him the entire story.[citation needed]

Jessica later went back to Clemons during her desperate plan to get locked up in a supermax prison to escape Kilgrave. She even brought Clemons the severed head of one of Kilgrave's victims as "proof" that she needed prison, and demonstrated her strength to make him afraid of her. However, Kilgrave wasn't willing to let Jessica go, and he took possession of the police station, causing all the officers to draw their guns on each other. As he left, Kilgrave told Clemons and the others to believe it was all a practical joke.[citation needed]

Clemons was contacted by Jessica again once she trapped Kilgrave in a hermetically sealed room, hoping to get a confession out of him, or proof of his powers. Clemons was supposed to witness Kilgrave's abilities, but he managed to escape the room after killing his mother and turning everyone else present against each other.[citation needed]

As Jessica hunted for Kilgrave, Clemons remained behind to secure the scene for the police, but he was shot and killed by Simpson, the unstable police officer who was also hunting for Kilgrave.[citation needed]

Like this? Let us know!
Retrieved from "https://marvel.fandom.com/wiki/Oscar_Clemons_(Earth-199999)?oldid=6283099"
Community content is available under CC-BY-SA unless otherwise noted.