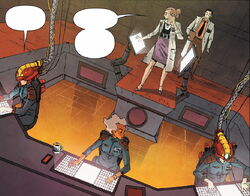 Oscorp rose to prominence through pioneering research in the field of psycho-genetics.[1] Thanks to this, they took part on a government project called SP//dr, which was comprised of three vital components: a pilot, a machine, and a radioactive sentient spider acting as one half of the brain that makes it all work.[2] After the original pilot misteriously died, Oscorp had his daughter, Peni Parker, brought into the program to replace him.[1]

Years later, the U.N. approved the budget to recommission the Sym Engine in order to create another protector for New York City, with Addy Brock being chosen to pilot the machine for her psychogenetic compability to it. When SP//dr was seemingly defeated by M.O.R.B.I.U.S., VEN#m was deployed to deal with it; however, Addy lost control over her suit during the battle and needed to be taken down by SP//dr. Both Addy and Peni's aunt May, who tried to fix VEN#m before it was too late, ended up disappering in the ordeal.[3]

Retrieved from "https://marvel.fandom.com/wiki/Oscorp_(Earth-14512)?oldid=5556998"
Community content is available under CC-BY-SA unless otherwise noted.