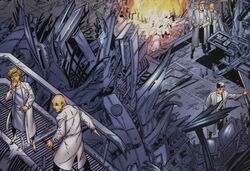 Working toward your future.

Oscorp is a multinational corporation owned and operated by Norman Osborn. The company developed new technologies and innovative materials the manufacturing, construction, automotive, and chemical processing industries before moving onto advanced sciences like bioengineering. The company developed the Oz Formula and the spiders who gave Peter Parker[1], and later Miles Morales,[2] spider-powers.

After an incident in which Osborn injected himself with Oz serum, a big portion of the main building was left in ruins, and numerous scientist died.[3] Osborn Industries had been mentioned to still produce technologies.[4]

Retrieved from "https://marvel.fandom.com/wiki/Oscorp_(Earth-1610)?oldid=5856371"
Community content is available under CC-BY-SA unless otherwise noted.