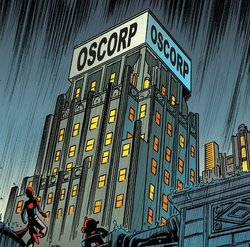 Oscorp was a corporation based in New York, ruled by Norman Osborn and later his son Harold Osborn. When the Web of Life and Destiny became disturbed, the section of New Tork City containing the Oscorp Tower became displaced into Earth-90214.[1]

Like this? Let us know!
Retrieved from "https://marvel.fandom.com/wiki/Oscorp_(Earth-22916)?oldid=5549442"
Community content is available under CC-BY-SA unless otherwise noted.