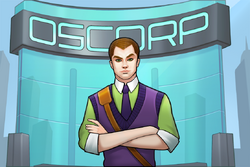 With the pretext of wanting to work with the Academy geniuses, Norman Osborn decided to move Oscorp Tower close to the Avengers Academy. His protégés Doctor Octopus, and the Lizard advised him not to do that, telling him doing that would potentially jeopardize their secret plan.

Worried about Spider-Man possibly interfering with their plans again, they recreated Spider-Man's webs in their labs, and committed various crimes around New York using it, making it look like Spider-Man was the one committing the crimes.[1]

Retrieved from "https://marvel.fandom.com/wiki/Oscorp_(Earth-TRN562)?oldid=5234084"
Community content is available under CC-BY-SA unless otherwise noted.