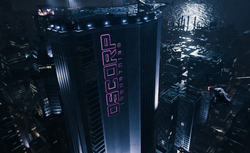 Oscorp Industries was founded by college friends Norman Osborn and Otto Octavius in the 1980s. Since then, the company grew to become one of the world's best known conglomerates. operating in various markets, from technology and transportation to pharmaceuticals and scientific development. Its main headquarters, Oscorp Tower, was located in Central Park South, Manhattan.

In 1986, the company was responsible for an incident involving Martin Li and the prototype serum GR-27, which caused Otto to leave the corporation to do his own experiments on his newly founded Octavius Industries. In 2018, Otto Octavius abudcted Norman Osborn to the top of the Oscorp Tower to expose him as a fraud, resulting in a fight between Octavius and Spider-Man.[1]

Oscorp is developing many equipments every day. Some of its new creations range from medical drone gliders to camouflage devices.

Like this? Let us know!
Retrieved from "https://marvel.fandom.com/wiki/Oscorp_Industries_(Earth-1048)?oldid=6224302"
Community content is available under CC-BY-SA unless otherwise noted.