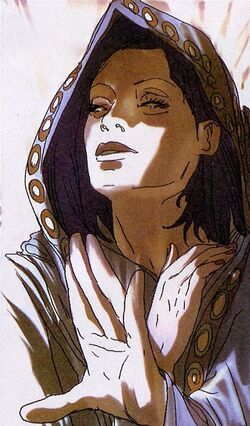 Oshtur is one of the Elder Gods of Earth, the first lifeforms spawned on the planet by its sentient biosphere, the Demiurge.

Oshtur had a fascination with the realms beyond Earth, unlike her siblings.[citation needed]

She took to the heavens ten of thousands of years before the conflict among the Elder Gods and their degeneration into malevolent demons.[6]

It is unknown for how long Oshtur left earth, but it is presumed to be millions of years.[citation needed] While exploring the universe, she met a companion in Hoggoth, and they eventually departed the traditional universe for a mystic dimension, where the two resided.[6]

After witnessing children play, Oshtur was moved and gave birth to Agamotto. She instructed Agamotto then left him to undertake the paths of magic. With Agamotto and Hoggoth, she formed the Vishanti.[7]

Oshtur was also responsible for creating the Tome of Oshtur and the Book of the Vishanti.[citation needed]

Age of Acheron and Hyborian Age

Oshtur created the Bird-Men, a race of winged humanoids, to fight against the bestial races spawned by Set and Chthon.[8] For eons they lived in Akah Ma'at city floated high above Cimmeria, enshrouded by clouds.[9] The floating city dedicated to Oshtur, in her guise as Ma'at, the Goddess of Truth.[10]

Ian McNee has a vision of Oshtur in which he is assigned to find the Four Cornerstones of Creation.[1] He later learned that this was a deception by Chthon, and the real Oshtur intercedes.[4]

Oshtur herself was known to be very kind and noble, as demonstrated as her Egyptian alias, Ma'at, who was the Goddess of truth, law, order, and justice.[11]

Oshtur appeared to have strong favor for the bloodline of Ororo Munroe. For some unknown reason, since the dawn of Atlantis, this line of African women was given distinguishing features of white hair, blue eyes, and powerful magic potential.[citation needed]

If ever Oshtur was to return to Earth permanently, it is likely the Demogorge would compulsively seek to target her, though her benevolence, magical skill, affiliation with Gaea, and Atum's current demise would limit her chances of harm.[citation needed][12]

Though last in Dr. Strange's possession, Oshtur is at least partially responsible for the creation of mystic items as the Book of the Vishanti and the Tome of Oshtur, as well as the Sword of Bone, holding magic so strong it even harmed the Hulk once.[citation needed][12][23]

Like this? Let us know!
Retrieved from "https://marvel.fandom.com/wiki/Oshtur_(Earth-616)?oldid=5751234"
Community content is available under CC-BY-SA unless otherwise noted.