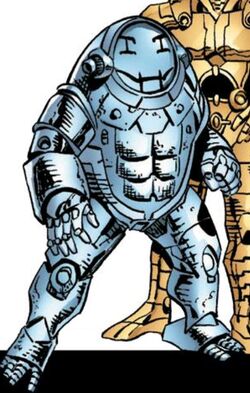 He arrives on Earth with Golden-Blade to crash the festivities on board the USS Constitution. They ran afoul of Ms. Marvel who repelled them.[3] Iron Man hears about Ms. Marvel's fight with Sapper and Golden Blade. He arrives to help Ms. Marvel where a miscalculation resulted in Sapper exploding.[4]

Like this? Let us know!
Retrieved from "https://marvel.fandom.com/wiki/Osinga_Rplss_(Earth-616)?oldid=4456837"
Community content is available under CC-BY-SA unless otherwise noted.