The Other: Evolve or Die 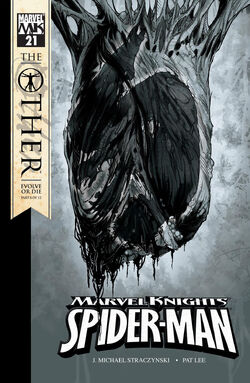 Official Name
The Other: Evolve or Die

Storyline Aliases
The Other

Peter Parker faces a life-changing event that will give a whole new experience to everything he once knew as Spider-Man.

Peter has started to dream strange visions about his life as Spider-Man involving Uncle Ben, Morlun, Kraven and spider imagery, all of this after Tony Stark revealed to him that he's been acting strangely lately (suffering dizzy spots, losing his powers momentarily, etc.)

After facing off a criminal named Tracer, Spider-Man suffers a severe bullet injury. After being nursed to health and approved for a blood analysis by the doctor, Peter discovers that he's suffering a rare disease and has very short time to live. Unknown to him, he's being followed by Morlun, waiting for the time to attack him.

Spider-Man confronts his wife Mary Jane to tell her about his situation, but when he decides to tell his Aunt May, he ends up fighting against Tracer once again, this time defeating him and revealing him as a machine.

Spidey decides to web swing to release his stress, but ends up being caught up by Morlun, who proceeds to attack him and beat him, but lets him go after he finds out about Peter's condition. Spidey leaves in defeat but on the way back he finds and severely beats Ox (seeing him as Morlun) only to be stopped by Daredevil from giving the thug further damage.

The following day Spider-Man receives another assault from Morlun, this time more severe than the previous one. Spidey gains the upper hand momentarily, only to be savagely and severely beaten by Morlun (to the point of plucking one of his eyes and eating it and leaving him in a major bloody mess). The NYPD and medics arrive to take him to the hospital while Morlun flees the scene to wait for the right time to finish the job. The New Avengers and Mary Jane arrive to the hospital only to watch Morlun attempting to kill Peter. MJ defends Peter only to be attacked by Morlun, prompting Peter to gain one last measure of strength to morph into a Spider-like creature with razor sharp teeth and stingers coming out of his wrists to assault and kill Morlun. With his last breath he gives MJ his final words and farewell while Iron Man takes away his body so his death won't go public.

While discussing how to deal with the death of Spider-Man and the disappearance of Peter Parker, strange noises come from the tower. By the time the Avengers find out, all that's left is Peter Parker's dead skin.

Peter ended up inside a cocoon underneath the Brooklyn Bridge. Inside he had a vision about a spider-like entity that informed him that all these years he had been neglecting his arachnid side. It was his spider-side who saved Peter's life in the battle against Morlun, but in order to return to life he must embrace his "Other" side. Peter accepts the deal and re-emerges revitalized.

After dealing with the medical tests, revealing that his evolution healed him of all his injuries and diseases from years past, Peter finds his dead skin now filled with tiny spiders, facing off a mysterious entity who came to claim Peter's life, but fails to do so.

Afterwards, he goes to save the lives of several citizens, discovering new powers (like night vision, his sedative stingers, etc.) and finds out that his evolution came after he embraced his "Other" side finally.

Peter repeatedly blacked out, felt weak and his prowess in combat reflected such. Unfortunately the one villain he could never beat returned, more than ready to finish Parker off for good. After almost dying from his wounds in a battle against the energy vampire, Spider-Man's body underwent a metamorphosis that granted him greater power than ever before, having literally shed his skin. This status quo would be maintained throughout Civil War and the Back in Black saga, all the way until One More Day concluded, which altered reality itself. One More Day resulted in Peter losing all of these powers; however, the events of this event are believed to have happened due to Kaine having gone through a similar change later when he was Scarlet Spider.

Retrieved from "https://marvel.fandom.com/wiki/Other:_Evolve_or_Die?oldid=5742279"
Community content is available under CC-BY-SA unless otherwise noted.