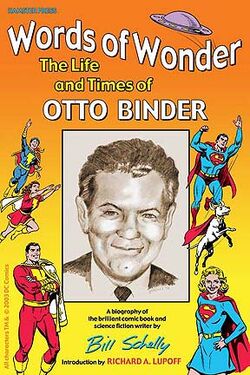 Otto binder was born in Bessemer, Michigan, the youngest of six children in a family that had emigrated from Austria a year earlier. They settled in Chicago in 1922, during a period rich with science fiction, which enthralled Binder and his brother Earl. The two began writing in partnership and sold their first story, "The First Martian" to Amazing Stories in 1930; it saw publication in 1932 under the pen name "Eando Binder" ("E" and "O" Binder). Otto is also the younger brother of comic book artist, Jack Binder.

Perhaps best known as a writer of Fawcett's Captain Marvel, Binder was also a writer of several Marvel comics in the Golden Age. He also wrote the paperback novel The Avengers Battle the Earth-Wrecker. In the Golden Age, Binder wrote stories for Captain America, All-Winners Squad, Sub-Mariner, Miss America, The Human Torch and many more. Binder died on October 13, 1974.

Like this? Let us know!
Retrieved from "https://marvel.fandom.com/wiki/Otto_Binder?oldid=4514609"
Community content is available under CC-BY-SA unless otherwise noted.