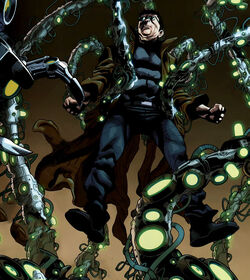 I'm a scientist, Osborn. I want -- I just want to be a scientist. I'm not a career criminal or some bio-terrorist or whatever it is you're trying to accomplish here.

Dr. Otto Octavius was a lab assistant to Norman Osborn and secretly a spy for Osborn's business rival, Justin Hammer. He was caught in a lab accident (the same one that turned Norman into the Goblin), grafting his traditional metal arms onto his body. After this incident, he was able to communicate with these mechanical arms via telepathy. He modified his arms to have the power to morph into different shapes, and then sought revenge against Justin Hammer, but Spider-Man intervened. Although Octavius was defeated by Spider-Man, Justin Hammer perished due to a heart attack caused by Doctor Octopus' attack.

Afterwards, Octavius was brought into S.H.I.E.L.D. custody where he, along with Norman Osborn, formed the Ultimate Six, comprised of some of Spider-Man's rogues gallery and an unwilling Spider-Man himself. In a battle between the Six and the Ultimates on the White House lawn, Octopus was taken down by the Wasp. Octavius was separated from his tentacles and held in a different prison far away from them.

Octavius later found out that his ex-wife was giving the rights to use his likeness in the Spider-Man film. Outraged, he summoned his tentacles from the S.H.I.E.L.D. facility and went on a rampage, until he was once again stopped by Spider-Man. Back in S.H.I.E.L.D. custody, Nick Fury melted Doctor Octopus' mechanical arms in front of him and instructed the guards to watch the melting mechanism for at least an hour afterward to make sure the arms would not try to escape.[3]

Otto Octavius and Ben Reilly were revealed to be responsible for all the Spider-Man clones, including an older clone of Peter believing itself to be Richard Parker. Their experimentation and research was done for the FBI in order to find a way to create super soldiers so the U.S. Government wouldn't have to be reliant on Nick Fury's monopoly on the Ultimates; he appeared alongside Fury, S.H.I.E.L.D. and the Fantastic Four in the storming of an Osborn Industries plant, and was outside Fury's jurisdiction. He was ultimately brought down by Parker and one of his clones, Spider-Woman[4]

Octavius was later working for the Roxxon Corporation and was the leader of the company's Brain Trust. He was working in response to the attacks on the company that were similarly committed on different locations such as the Baxter Building. After Spider-Woman was captured by Roxxon's Brain Trust, Otto revealed himself and informed them that he was present at Jessica's birth.[5] He explained to his Brain Trust that Spider-Woman's involvement in the matter is unrelated to their investigation and clearly wanted for vengeance.

At this point, Spider-Man burst in, subduing Octavius and his Brain Trust, and freeing Spider-Woman. Thereafter Octavius was furiously beaten by Spider-Woman before being stopped by Spider-Man and together left Roxxon. Afterward, the same entity that attacked Roxxon had returned and crushed the building along with Octavius.[6] Octavius was weighted down by the biomass while struggling to keep himself from being crush to death.

Fortunately, Spider-Man and along with a very reluctant Jessica Drew pulled him out before the biomass completely collapsed on the building. Octavius gratefully thanked for saving him. Thereafter, Johnny Storm and Rick Jones appeared before them and informed them the attack on Roxxon and the other invaluable locations were being committed by a mad Reed Richards. Upon hearing this, Octavius decided to come with them in stopping Richards as he reasoned that he knows well about him and claimed that he is the cause for ruining his (Octavius's) and Jessica Drew's lives, and as well for possibly killing his Brain Trust. Much to Spider-Man and Jessica Drew's chagrin, Octavius was immediately brought along and transported to Project Pegasus.[1]

When Norman Osborn, the Green Goblin, escaped the Triskelion, he took with him five other super-villains, one of them being Octavius. At Osborn's apartment, he discussed with Osborn against killing Spider-Man, saying that he was their greatest creation. An enraged Goblin attacked Octopus, and after a fight in the streets, Osborn ultimately killed Octavius, beating him to death.[7]

Ferrokinesis: Otto Octavius had the ability to manipulate metal. He created a new set of arms out of metal scraps and battled both Spider-Man, Spider-Woman and other Parker clones before being knocked out.[4] How similar or dissimilar his power is to that of Magneto is still unknown. Octopus could mentally control these mechanical arms, even when they were miles away.

Eyes damaged in the accident that gave him his powers, meaning he has to wear special glasses to protect them. Octavius is also mentally unstable and carries on conversations with his tentacles.[2]

Doctor Octopus' Tentacles: In his former tentacles, a number of projectile weapons were incorporated into the ends of them, which could also be used as melee weapons.

With his ability, Octavius could use any metal as a weapon, but he only uses this power to make tentacles.

He moves around quickly by walking on his four tentacles (although he has been shown to require only two to walk on).

Like this? Let us know!
Retrieved from "https://marvel.fandom.com/wiki/Otto_Octavius_(Earth-1610)?oldid=6076518"
Community content is available under CC-BY-SA unless otherwise noted.