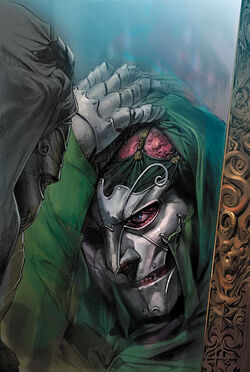 A friend of Sir Richard Reed, Otto Von Doom, called the Handsome, was the ruler of Latveria. Doom's father engaged in breeding studies, which were condemned as heretical by some, such as the Grand Inquisitor. These studies yielded humanoid creatures that served Doom.[citation needed]

When the Four from the Fantastik came to his country, he captured them and imprisoned them. He would often go to the dungeon to speak with Sir Reed of scientific ideas (most often he wanted to speak of explosives, poisons and machines) and use what he learned for his own purposes. He sent three assassins to England; one to kill Sir Nicholas Fury, one to kill Virginia Dare, and one, his ambassador, to kill Queen Elizabeth I. Though the first two were unsuccessful, the mechanized gift he'd sent the Queen succeeded in killing her. He also had some of his men follow Matthew Murdoch and Natalia Romanova to the Old Man of the Templars (Donal) that he might take the Templars' secret treasure for himself. Doom had paid Natasha and she betrayed Murdoch and brought him, the Old Man and the treasure to Doom's castle. Doom studied the treasure, a strange golden sphere that the Old Man had been carrying. But not knowing that it was not the real treasure, but instead a bomb. When Doom's castle was attacked by a boatload of heroes led by Nicholas Fury and Carlos Javier, Doom engaged them in battle. During this, the Four from the Fantastik were freed from their prisons and confronted Doom. Doom raised the golden sphere to the sky and it was struck by lighting in an attempt to unleash its powers, but it did not release the power Doom craved. Instead, he was nearly killed and horribly disfigured when the sphere exploded in front of him. When Natasha found him, he asked her to hide his face.[citation needed]

Sometime after his incident, Doom had heard about the Four Who Are Frightful's story of traveling to a lost mystical city "over the end of the world" and hoped that he would find a way to restore his damaged face from the city's inhabitants. He hired the group to lead the journey. Wanting someone to document the voyage Doom had William Shakespeare kidnapped, which attracted the Four from the Fantastik to rescuing the playwright. On the way to the lost city Doom killed Natasha for losing faith in him by dropping her from his airship hundreds of feet above, and then promoted The Wizard as Natasha's replacement. After a sea battle between the Four from the Fantastik and a leviathan, Doom and all participating parties arrived at the lost city, known as Bensaylum, and were greeted by the city's rulers Numenor and his cousin Rita. From there, Doom plotted with Numenor into delivering Susan Storm and her brother John to him and his sister as their respective lovers. However, Doom also plotted to obtain Numenor's mystical trident to rule over Bensaylum. Unfortunately Doom's insidious efforts failed when Numenor was stabbed by his own trident and according to his dying words that if any royal blood is spilled on to the trident, it would cause Bensaylum to be vanish forever. This caused the city and all its citizens to sink into the sea along with Doom, still madly wielding Numenor's trident.[citation needed]

Doom is a skillful genius

While in his armor, Otto can lift 2 tons

Like this? Let us know!
Retrieved from "https://marvel.fandom.com/wiki/Otto_von_Doom_(Earth-311)?oldid=5600976"
Community content is available under CC-BY-SA unless otherwise noted.