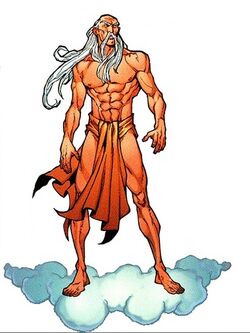 Ouranos also known as Uranus was the primal god personifying the sky and one of the primordial deities.[1]

Ouranos was the first son of Gaea from the Greek Pantheon who nightly covered Earth to mate with his mother to produce several of Olympus' first races such as the one-eyed craftsman giants known as the Cyclopes, the hundred-headed giants known as the Hecatonchires, and the divine humanoid elementals known as the Titans.[1]

Repulsed by his children, Ouranos had them banished to Tartarus. Offended by her lover's treatment of her children, Gaea convinced the Titans to overthrow their father and had Cronus, the youngest of the Titans, ambush Ouranos in his sleep and delivered a fatal blow with a Gaea-granted flint sickle. As Cronus was chosen succeed Ouranos and rule the Titans, Ouranos warned Cronus of a prophecy that one of his own children would dethrone him in turn with his final breath.[4]

As Ouranos perished, his blood flowed unto the Earth to give birth to the Olympian Gigantes that would eventually wage revolts against Ouranos' grandson Zeus and his gods,[5] the Furies that would act as the feminine gods of vengeance and punishment.[6] The myth of the love goddess Aphrodite appeared from the seam foam generated when Ouranos' severed testicles fell into the Aegean Sea, but this was later proven to just of been a story.[6]

As the primordial embodiment of the skies and the heavens, Ouranos had virtually supreme power over the wind. Ouranos possessed vast, undefined energy powers surpassing those of many, if not all, of his descendants. He could enchant living beings and inanimate objects, create interdimensional apertures, and possessed limited precognitive powers. His body was also highly malleable, and he could stretch his rangy limbs over vast distances.[7]

Retrieved from "https://marvel.fandom.com/wiki/Ouranos_(Earth-616)?oldid=5716598"
Community content is available under CC-BY-SA unless otherwise noted.