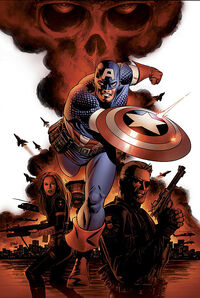 Official Name
Out of Time

A midnight call to duty brings Captain America aboard the S.H.I.E.L.D. Helicarrier to identify the corpse of his most feared adversary: the Red Skull! The shocking murder of Cap's oldest enemy may not be the end of the Skull's plans, however, because whoever shot the Skull has stolen his final project: an unfinished Cosmic Cube with the potential power to alter reality itself. Adding to the imminent danger, a cadre of the Skull's followers has already set in motion a plan to ignite bombs in the hearts of Pennsylvania.

Retrieved from "https://marvel.fandom.com/wiki/Out_of_Time?oldid=5204053"
Community content is available under CC-BY-SA unless otherwise noted.