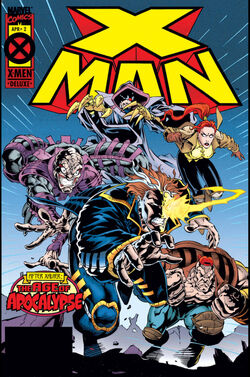 The group of mutants known as the Outcasts were formed by the mutant inventor Forge shortly after he parted company with Magneto[1]. The band consisted of the mute illusionist Mastermind, the mentally feeble escapee from the slave pens known as the Brute, the deformed Toad, and the bitter Sauron. They traveled the wasteland of America, putting on Shakespearean plays for surviving humans and helping those in danger from the forces of Apocalypse. Along the way they recruited another Slave Pen escapee Nate Grey, a powerful telepath[2].

The band came across a train of humans being led to the nearest slave pens for slaughtering and freed them, battling an army of Infinites. Nate jumped into battle, using his powers. He was rescued by young mutant Theresa Cassidy who joined their band as Sonique. In escaping, they came across a man named Essex who joined them. Unknown to all, Essex was in reality the Horseman Sinister, who had recently defected to track down Nate, his own creation, to direct him in his destiny: to destroy Apocalypse. Apocalypse himself learned of Nate's existence as his minion the Shadow King detected the boy's presence. Apocalypse dispatched his minion Domino to recruit or kill him[2].

The band decided to lay low for a while and Forge continued training Nate how to fight without relying on his powers. Essex encouraged the boy in the use of his powers, much to Forge's disapproval. Essex convinced the Outcasts to investigate one of Apocalypse's human processing factories, and Nate subsequently destroyed it.

Brute began to recognize Essex from somewhere, but his damaged mind had difficulty placing him. Brute remembered who Essex was. When the Brute confronted Essex, Essex killed him[3].

Domino and her minions tracked down the Outcasts and attacked at the moment that Forge confronted Essex and asked him to leave. The Outcasts were mostly slaughtered by the attackers. Mastermind was incinerated by Domino and Toad was slain by Grizzly. However, Toad slew Caliban, Forge killed Grizzly, and Nate wiped Domino's mind. Forge resumed his conversation with Essex, who revealed his true identity and killed Forge. Nate left to get vengeance on Sinister[4]. Nate learned his intended purpose and seemingly slew Sinister before flying off to confront Apocalypse, leaving Sonqiue to care for Sauron[5].

Nate found himself transported to Earth-616 where he is still currently active[6]. While Sinister survived he recruited Sauron and Sonique in his Sinister Six[7]. Sinister and Sauron were slain in a battle with the X-Men, while Sonique was knocked out and taken into custody[8].

Like this? Let us know!
Retrieved from "https://marvel.fandom.com/wiki/Outcasts_(Earth-295)?oldid=5549483"
Community content is available under CC-BY-SA unless otherwise noted.