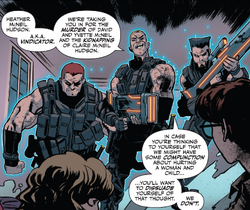 The Outcasts was a four-person group of mercenaries who worked on a variety of missions. Each member had their own unique gift though all were experienced and hardened fighters. At an unspecified point in time, the group disbanded.

After Canada instituted the Super-Power Registration Act, Cleft caused a disturbance in Moosejaw. When Puck saw the report at Department H, he recruited Wild Child and Northstar to assist him.[1]

Once the three Alphans had Cleft under control Flagstone and Depth Charge arrived. During the ensuing battle, Puck conquered any doubts he had about his actions and ensured a victory. The Outcasts were taken into custody.[2]

Retrieved from "https://marvel.fandom.com/wiki/Outcasts_(Mercenaries)_(Earth-616)?oldid=5075824"
Community content is available under CC-BY-SA unless otherwise noted.