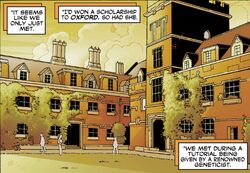 University of Oxford is a collegiate research university located in Oxford, Oxfordshire England. It's origins still remain a mystery it is the oldest university in the English-speaking world. In 1209 A.D. after a dispute between academics a group moved to Cambridge and established the University of Cambridge. These two university's are often referred to as "Oxbridge".

In the 19th Century, Nathaniel Essex a brilliant doctor and scientist gained a full scholarship to Oxford. It was their he gained his medical degree and a Ph.D. in biology. It was at Oxford were he discovered the Essex Gene the catalyst for the Mutant species.[1]

In the 1920s, Herbert Wyndham was studying as Oxford University. He was inspired by the work of Nathaniel Essex to perform his own genetic experiments, evolving rats in his parents' basement. Later, when he attended a conference in Geneva, Wyndham was approached by a disguised Inhuman, who gave Wyndham the secrets for unlocking genetic codes. As a result, he created a serum that allowed for genetic alteration, but his controversial work got him expelled from Oxford.[2]

Charles Xavier was intent on undertaking graduate studies, and won a scholarship to Oxford University to gain his Ph.D.s Genetics, Biophysics. It is at Oxford where he met and fell in love with a young Scotswoman named Moira Kinross .[3] Moira and Xavier's passionate discussions on genetic mutation gave way to an equally passionate romance.[4] He was forced to compete with her jealous boyfriend Joe MacTaggert.[3] While still studying at Oxford he was confronted on campus by two mutants named Logan and Victor Creed who upon learning that the US government was actively imprisoning mutants, were seeking to band mutants together in a common group. Xavier flat out turned Logan and Creed down, something he would grow to regret in later years. [5] It had also been hinted that Mister Sinister interfered with Moira and Xavier's relationship, as he was posing as a professor at Oxford at the time.[6] Charles was impressed by his teaching but was suspicious that he could not read his mind.[3] Charles and Moira planned to be married, but after finishing his work at Oxford, Xavier was drafted.[7]

The crown prince of the African nation of Wakanda; T'Challa. attended Oxford were he he gained a Ph.D. in Physics.[8]

Dr. Derenik Zadian gave a lecture about scientific progress in the Oxford Forward Thought Conference, stating that to progress, scientific knowledge would always need to be used for military uses in order to be funded. One of Zadian's themes was "to use what nature already invented." Two of the listeners were a young Tony Stark and Bruce Banner.[9]

Anne-Marie Baker was fascinated by ley lines since her early studies at Oxford University, so she assisted Dr. Evan Swann, who was conducting some ley line experiments at the Empire State University.[10]

Jasper Angevine was a student of computer sciences at Oxford University, specializing in data encryption, with his rich parent paying for it. He was accused of vandalism on the headmaster's office, apparently because the headmaster had reduced scholarships for underprivileged students, and he also tried to get credit for a course in Bikini waxing.[11]

Hank Pym gained at teaching job at Oxford and began a relationship with a college student After the woman learned everything from him, she revealed herself to be a Skrull and used the power of the Hulk to defeat him, she then took his place.[12]

Cindy Moon was accepted to Oxford University but she was taken away to Sims Tower before she could attend.[13]

A natural genius, Charles Xavier completed high school at sixteen. He attended Oxford University accompanied by his adopted "sister" Raven Darkholme. He earned Ph.D.s in Genetics, Biophysics, and Psychology. After completing his thesis on genetic mutation, he was in the Eagle Pub when he was approached by Agent Moira MacTaggert of the CIA. She asked him for his help in stopping a mutant named Sebastian Shaw, who was working with the Soviet Union.[14]

Gwen Stacy was offered the chance of a place at Oxford University. When she arrived at her final interview for Oxford, and despite an encounter with an oblivious Peter at the reception managed to get in. Deciding it was best to leave as soon as possible, Gwen left for the airport then and there to go to the University's Summer School program. Peter Parker decided to go with her, but sadly she was killed during a fight with Harry Osborn before she could attend.[15]

Like this? Let us know!
Retrieved from "https://marvel.fandom.com/wiki/Oxford_University?oldid=5617135"
Community content is available under CC-BY-SA unless otherwise noted.