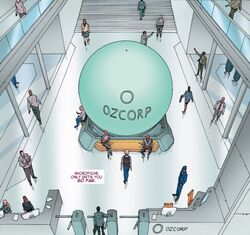 Ozcorp was the multi-million dollar company run by Mayor Norman Osborn. He often used Ozcorp money to fund his operatives, such as a police task force. These agents recently teamed-up with the Enforcers to capture the Web-Warriors[1]

Failing, Osborn sent his Sinister Six to seize the spiders at the Brooklyn Navy Yard. Succeeding, they brought them back to Ozcorp Tower. Norman would on go on to ask them for help understanding the Web of Life and Destiny, with all agreeing except Spider-Woman.[2]

Shortly afterwards, Peter Parker called Norman to meet him at the George Washington Bridger, destabilizing Osborn. After leaving with the Sinister Six, Spider-Girl took the other Web-Warriors to see Norman's "Caesars Palace," which Spider-Ham mentioned to her when they were having lunch. Inside the room was the Siege Perilous, the chair reserved for the man who finds the Holy Grail, and hanging above it was a helmet linked to the the chamber where the energies of the web were being directed. According to Porker, whenever Osborn started to get really mad and complaining about how he was going to overthrow God Emperor Doom, he went to this room to sit in its chair. Suddenly, the room started to be filled by lightning bolts and a Thor appeared before them to reclaim the chair.[3]

The Warriors would use Electro to create a feedback loop that destroyed the room and knocked everyone inside unconscious. Norman would realize what happened and attempt to use the machine. However, Peter sabotaged the machine, giving Norman brain damage.[4]

Retrieved from "https://marvel.fandom.com/wiki/Ozcorp_(Earth-22191)?oldid=5594489"
Community content is available under CC-BY-SA unless otherwise noted.