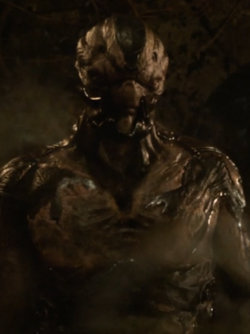 Pachakutiq was a non-corporeal entity who was the lover of Izel, the two of them coming from a world where local inhabitants had no bodies. Through space and time, the Di'Allas created on their world a duplicate of Human who would not be born for another hundreds of years. Pachakutiq attempted to take over this body, but in the process his memories became entangled with that of his host, and he believed Izel to be the one who robbed him of his memories after killing his family. Adopting a new personality of Sarge, Pachakutiq began to hunt down Izel, who had left their world after gaining a body of her own. Izel had the power to create parasitic creatures known as the Shrike, which would devastate planet after planet as she spend centuries searching for the Di'Allas that were stolen from her, with Sarge always on her tail.[1]

Like this? Let us know!
Retrieved from "https://marvel.fandom.com/wiki/Pachakutiq_(Earth-199999)?oldid=6074555"
Community content is available under CC-BY-SA unless otherwise noted.