After her older brother Sam's mutant powers manifested and he joined the New Mutants, Paige tried many things to discover whether she was also a mutant, but became frustrated after many failures. Venting her anger, Paige finally found that her power was to shed her skin.[10]

She kept her nature secret until the day Sam and his X-Force teammate Boom Boom visited the farm. They were abducted by the Fenris twins as part of the "Younghunt," a contest involving the capture of young mutants. The X-Force teamed up with the New Warriors, whose member Firestar had also been captured. Together they opposed the organizer of the contest, the Gamesmaster. Paige secretly followed them and confronted the Gamesmaster, defeating him in a game of wits.[citation needed]

Soon after, Paige was kidnapped by the techno-organic alien Phalanx, who sought to learn how to assimilate mutants into their collective.[11] Paige and her fellow abductees were rescued by an ad-hoc X-Men team, and subsequently became founding members of Generation X, a team of mutants enrolled at the new Massachusetts branch of Xavier's School.[12][13]

During her time there, Paige studied to become a better X-Man than Sam.[2][14] She also romanced her teammate Chamber, although their relationship was strained and terminated more than once because of his self-sabotaging.[15][16][17][18][19][20]

Some time after the school was closed, Paige was recruited by her former headmaster Banshee into his paramilitary X-Corps.[21] After that group was dismantled, Paige went to study at the re-established Xavier Institute. Her interest in environmental issues led to her discovering corruption within Worthington Enterprises, the company owned by the X-Man Archangel. Investigating, she and Archangel encountered the Dominant Species, and she was almost killed. Archangel saved her with his healing ability, after which they became romantically involved.[citation needed]

Having finally graduated to the ranks of the X-Men, Paige later aided Archangel in establishing the global mutant outreach program Mutantes Sans Frontières. Setting up office in Zanzibar, they became involved in an attempt by the Hellfire Club to destabilize the country by employing the mercenary Weaponeers. Alongside the country's President, who was secretly the superhero Askari, as well as reinforcements from Genosha, the heroes managed to repel the invaders.[citation needed]

Her younger brother Josh later joined the New Mutants Squad under the codename Icarus.[22][23] Her sister Melody also joined the school as Aero after discovering she could fly, but was depowered on M-Day,[24] although Paige herself retained her powers.[25]

Husk later clashed with the O*N*E after they attempted to confiscate her personal items, and hacked into their computers in retaliation. Following the murder and subsequent funeral of her brother Jay, Husk returned home to Kentucky before re-joining the X-Men in San Francisco to help repel the Skrulls invasion. She was also seen in Utopia, fighting against Norman Osborn's Dark Avengers.[citation needed]

During the Necrosha event, Husk was part of the team that was sent to Muir Island to investigate.[26] Paige fought,[27] but she too was possessed by the villain Proteus, who gained the ability to possess more than just one host. While possessing her, he demonstrated husking into a flaming form. Eventually, Paige was freed from Proteus, and he was defeated by Magneto.[28]

Later, she was seen in the San Francisco Subway, fighting Nimrods alongside Avalanche, Sunspot, and Boom-Boom. As the team seemed to be struggling with the Nimrod, Paige tried Husking into a corrosive form to try and corrode the Nimrod. The robot used his technology to get used to this form and literally ripped it from her body. It took the combined efforts of the whole team to defeat the robot. But just as it was destroyed, two more arrived and the team was forced to fight. Later, it seemed the team defeated the Nimrods in the tunnels as Paige joined the fight on the Golden Gate Bridge where she witnessed the defeat of the Nimrods, wondering what had caused them to malfunction.[citation needed]

Curse of the Mutants

After Paige's old teammate Jubilee was turned into a vampire, Paige made it her mission to find her. Pretending to be a helpless girl, she let a vampire take her to an abandoned warehouse where he tried to bite her. However, under her skin, she assumed a wooden form. Throwing him off her, she demanded to know where Jubilee was. The lights turned on, revealing a group of vampires in the room. After they refused to give her information, Paige shredded her skin to reveal the wooden, spiked form. She attacked the vampires, staking them with her arms and legs, one by one, but they didn't have any information on her friend.[29]

After this, Paige returned to Utopia where she joined the strike force against the vampires. Paige yet again assumed her spiked, wooden form and took down several vamps before she was taken out by a possessed Wolverine.[30]

Paige was with the mutants who chose to side with Wolverine in the aftermath of his climactic battle with Cyclops for leadership of the X-Men. She seemed content to turn her back on the life of a soldier that she had been living. It was during a conversation with Sam that she seemed to make the final decision of accompanying her brother. After she left, he revealed to Dani Moonstar that Paige's powers hadn't been working correctly and that she had been molting everywhere.[31]

Paige joined the Jean Grey School for Higher Learning as a Junior staff member, teaching History of Mutant Art and Mutant Literature. On the first day of school, Paige had to 'husk' into a more aggressive form and shout at her students in order to make them start paying attention to her.[32] Later during the class, the school was attacked by the Hellfire Club and Paige had to husk once again, this time into her fire form, to eliminate the threats and protect her students.[33] Once the threat was dealt with, she was seen holding a class outside, thanking Krakoa for the shade it provided.[34]

At a faculty meeting a week later, Paige tried to express her insecurity about teaching and shared that the kids weren't listening to her, but she was ironically cut off by Beast before she could finish.[35] As her condition worsened, her relationship with her brother Sam also suffered some setbacks.[36][37] The only person she was close to during this time was Toad, the janitor, who had impressed her by rescuing a student[37] and had gone on a few dates with her.[38]

Eventually, she quit the school, believing Kitty would fire her,[39] and joined the Hellfire Academy. Seemingly in love with Toad, she also made him betray the School and recruit Quentin Quire, Glob Herman, and Idie.[40]

At the Academy, she assumed the functions of lunch-lady, librarian, and hall monitor, enjoying screaming at the students. She also humiliated Toad, sending him back to his previous job as janitor.[41]

When the Hellfire Academy fell under the assault of Wolverine and his teachers, seeking to rescue their students, Husk fought against Toad and Quire, who were trying to escape. Husk charged against Toad and hit him with everything she had, but Toad refused to fight back against her. After seeing she couldn't be reasoned with, however, he apologized and began ripping layer after layer of her skin, until she finally regained her senses. Unfortunately, she also lost the memories of her relationship with him.[42]

After the battle, she was allowed to return to the Jean Grey School as the new guidance counselor, but the rest of the staff didn't trust Toad anymore and told him to leave. Before his departure, Paige asked him out so she could get to know him again, but he was afraid she'd realize she was too good for him and instead left for parts unknown with Doctor Frankenstein, after the teenager escaped from the school. Paige was shaken that he'd leave her without saying goodbye, but chose to focus on getting her mood change under control and excelling in her new position at the school.[43]

Husk start moonlighting for S.H.I.E.L.D. Non-Human Resources Department at Tabula Rasa. After S.H.I.E.L.D. was dismantled, she remained there to care after the fauna, but they were soon disturbed by "Fakepool" (the Chameleon posing as Deadpool, stealing and selling S.H.I.E.L.D. weapons). She teamed up afterwards with Deadpool and Spider-Man, coming under attack by "Fakepool" and the creatures of Tabula Rasa.[44]

While working on her Ph.D., Paige returned to Xavier's Institute. She helped out in the counseling office and worked with Bling! to overcome her insecurities.[6] After Krakoa's arrival in Manhattan caused the Museum of Natural History to collapse, Husk helped find Jubilee and Bling! in the rubble.[45] Later, along with Jubilee and Chamber, she helped take down Monet while she was possessed by her brother.[46]

Husk was one of the many mutants that opposed the crazed X-Man from remaking the world in his image. When X-Man realized that his vision of the world would never come about with the X-Men around, X-Man made his enemies vanish in an instant, including Husk.[47]

Husk and the mutants that vanished were sent to a different reality created by Nate Grey and a Life Seed, a world where everyone on Earth was a mutant and relationships were strongly discouraged or illegal.[48]

Husk became a teacher in the Agricultural Division at the Summers Institute for Higher Learning. She was showing some students, like Glob Herman and Shark-Girl, that it fell to them to nurture the produce and livestock they manufactured there, so that their community could prosper from it.[7]

While not seen, Husk was presumably allowed to return to the real world when X-Man decided to release the mutants he trapped in his reality.[49]

At some point, Paige was invited to the Mutant nation of Krakoa, created by Charles Xavier, Magneto, and Moira X. While there, she joined Cyclops' team on a mission to destroy Mother Mold before the creation of Nimrod. The whole team was killed, but not before they managed to destroy Mothermold.[50] 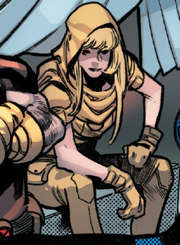 The team was later resurrected by a group of mutants known as “the Five”, who were able to transfer the deceased X-Men's minds into cloned bodies. As they were reborn, they were later proclaimed as heroes of Krakoa.[5]

On Krakoa, she was shown living in the Akademos Habitat along with her siblings Sam, Jay, and Melody.[51]

Husk is adept at the programming and operation of computers, including computer hacking which she has a known reputation for.[58][59]

Insanity & depression: For a few months, Paige proved to be psychologically unstable, with gradual physical evidences due to her mutation, first molting[31][32] and later combining multiple skin forms simultaneously.[40] The power and personality swings appeared related, as she was able to change personality just by shedding her skin. It was later stated that those blackout and personality swings were due to a Secondary Mutation.[43]