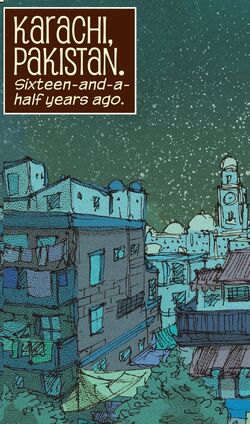 Pakistan, officially the Islamic Republic of Pakistan, is a country in South Asia. Its capital city is Islamabad.

In 1947, after the free states of India and Pakistan are formed sectarian violent's erupts in the country between Hindus and Muslims. The Khan leave their home in Bombay, India to start a new life in Pakistan. As they live a shooting star flew through the heavens giving them hope for the future.[1] Kamala Khan's parents eventually moved from Karachi, Pakistan and settled in Jersey City in the United States of America.[2]

In 1962, Taboo escaped from Europe to his home in Punjab during the warfare between Pakistan and India. Soldiers came to his home and took him as a prisoner to their stockades. His fame as a sorcerer was common knowledge and they believed that they could harness his powers to aid them in their battling. When he refused, he was taken to a prison camp where he found Topaz, a small child with mystic powers, being labeled a witch by the other prisoners. So, Taboo made the little girl his familiar and began to train her using her powers. After he asked her to destroy a guard tower, she took the guards weapons and they escaped from the prison camps.[3]

Islamabad and other world's capitals are vanishing engulfed by mysterious maelstroms. The UN calls upon the Avengers to take leadership in this time of crisis.[5]

The X-Statix went on a mission to Pakistan taking out a group of soldiers in Kashmir.[6]

Wolverine and Deadpool both tried to take down a Hydra facility in Pakistan.[7]

After joining the black ops team Vanguard, Micromax was sent on various missions one being to Pakistan.[8]

The Chameleon, disguised as Peter Parker, tried to learn as much has he can about him. He also spontaneously kisses Parker's girlfriend Michelle. After meeting with Mary Jane Watson and Flash Thompson, Chameleon tries to find the location of Shadow Command, New York's black ops unit, planning on blowing it up, which he relays to a contact in Pakistan.[10]

Over Pakistan, Norman Osborn, in his Iron Patriot armor, asks his assistant Walsh on the Helicarrier to feed him Stark's coordinates. However, Walsh is purposely misleading him with false coordinates. Osborn tries calling Hand, but she is not responding. Growing aggravated that his own Deputy Director is too busy for him, the self-boasting man who beaten back the Skrull invasion, he causes an explosion on the ground.[11]

In Pakistan, the Hammers receive word about Stark's proposition. They then get a call from Babbage, who wants to purchase Detriot Stee. Justine agrees to it, before meeting with a few Pakistani guerrillas.[12] The Hammers are showcasing Detroit Steel to Pakistani guerrillas, as well as selling to them the H.A.M.M.E.R. weapons surplus, all based on old StarkTech. The only reason the Hammers are selling is because they are influencing more strife.[13]

Pixie brings them to Pakistan. Though Transonic says they can't just walk into a warzone, Hope states they have a mutant to save. They then split up and search a nearby town, Martha using her telepathy to mask their presence. They then find their mutants, but he opens his coat to reveal a bomb, which goes off. When Hope and company investigate an unaccounted for mutant reading in Pakistan, they come across a full-grown mutant with no memory being used as a weapon.[14]

After witnessing first-hand an incursion, an event wherein two universes collide with each universe's Earth as the point of impact The Illuminati attempted to use the power of the Infinity Gauntlet to avert an incursion. They traveled to Gilgit-Baltistan, Pakistan While wielding the gauntlet, Captain America succeeded in pushing away the other Earth, but in the process the Gauntlet broke and the gems shattered. Despite having failed, and lacking any other method to avert an incursion without destroying the other Earth, Captain America vehemently refused to go along with the idea of building weapons to destroy other planets, even if such weapons would only be used as a last resort. Finding themselves at an impasse, the rest of the Illuminati agreed to remove Captain America from the group, wiping his memory of their existence.[17][18][19][20]

Rashid was an accountant Black Widow helped escape from Pakistan. During his escape, his face was scarred by an arrow of Hawkeye, who was trying to prevent Rashid from getting away.[21]

During a mission to Pakistan; Iron Patriot attempted to apprehend the phantom bomber he blasted into a small textile factory room, inadvertently freeing a number of enslaved women working there. One of them proved to be an Extremis-enhanced soldier however, and she disabled the suit's systems with a surprise attack before Rhodes could react.[22][23]

Quicksilver is leading his sister; Scarlet Witch and the animal Animal Evolutionaries through Pakistan and India to disarm their nuclear capabilities. Quicksilver's intentions are to prove to the world, and those who turned their back on him, that the Brotherhood of Mutant Supremacy are on track to ruling the homo-sapiens. The Evolutionaries are becoming fed up with Quicksilver's pacifist tactics against humanity, wishing to prove they are mightier than those left in the Brotherhood.[24] The West Coast Ultimate After failing to find terrorist Osama bin Laden in Pakistan, Ultimate Wonder Man Hulked-out, forcing his teammates to fight him. This situation, along the team's previous rogue attitude, made S.H.I.E.L.D. decide they were too dangerous. Nick Fury decided to put them in stasis tubes until they were be truly needed.[25]

Iron Man discovered that A.I.M. (Advanced Idea Mechanics) had been conducting research into techno organic weaponry for some time and pinpoint one of their warehouses in Karachi. A.I.M. tried to sell weapons to a buyer but the Punisher came in and breaks it up. Just as Punisher is about to kill the A.I.M. member, Iron Man saved him in order to get some answers. Iron Man and Punisher then work together and discover the identity of the new enemy being Zeke Stane. Hawkeye and Black Widow are given orders to retrieve Iron Man. He escaped with the help of the Punisher.[26]

Like this? Let us know!
Retrieved from "https://marvel.fandom.com/wiki/Pakistan?oldid=4640309"
Community content is available under CC-BY-SA unless otherwise noted.