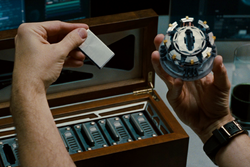 Palladium is a chemical element with the symbol Pd and atomic number 46. It is a rare and lustrous silvery-white metal discovered in 1803 by William Hyde Wollaston.

Tony Stark's design of the Arc Reactor in his chest required a heavy element such as palladium to keep it running.[1] Unfortunately, palladium was continuously eroded by the neutron bombardment and released deadly poisons into Tony's body.[2]

Realizing he was dying, Stark began acting very erratically including signing control of Stark Industries to Pepper, spontaneously deciding to drive his own formula 1 in a race in Monaco, and indulging in alcohol and women. With Tony's behavior getting out of hand, Rhodey was forced into stealing the Iron Man Mark II Armor, brawl with Tony in his Malibu mansion, and take the Mark II Armor back to the US Military. Nick Fury and S.H.I.E.L.D.'s intervention temporarily reversed some of the palladium poisoning symptoms allowing Tony to discover his father's design for a new element to replace the palladium. Building a small particle accelerator in his garage, Tony was finally able to create a new element that met his needs, and in turn created a new armor suit to utilize the new power.[2]

Like this? Let us know!
Retrieved from "https://marvel.fandom.com/wiki/Palladium_(Element)?oldid=6435848"
Community content is available under CC-BY-SA unless otherwise noted.