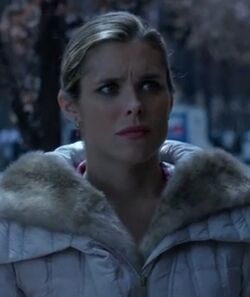 Pam was a secretary for Jeryn Hogarth at the law firm of Hogarth, Chao and Benowitz. At some point she entered a romantic relationship with Hogarth, who left her wife for Pam.

Ultimately, Pam ended up killing Wendy (who was under the control of Kilgrave), in an attempt to save Hogarth's life. Pam was taken into police custody for Wendy's murder and broke off her relationship with Hogarth.

Like this? Let us know!
Retrieved from "https://marvel.fandom.com/wiki/Pamela_(Earth-199999)?oldid=5825167"
Community content is available under CC-BY-SA unless otherwise noted.