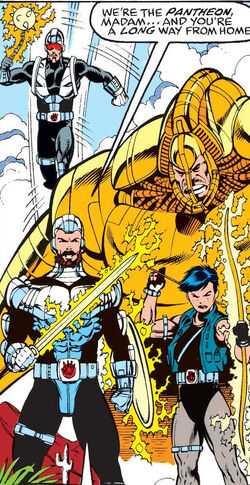 Base of Operations
The Mount, Nevada
Affiliations

Agamemnon, half-human and half-Asgardian god, was born immortal, and, though he never physically aged beyond the age of 16, the Pantheon are all his descendants. Stationed in the Nevada desert based headquarters called The Mount, the Pantheon have recruited the Hulk as a member and ally, and the team joined him on several adventures. Internal struggles and the devious actions of Agamemnon and former team member Paris led to the Pantheon's eventual pilgrimage away from The Mount, and ultimately to their recruitment by the United States government. Members of the team possess super strength, a healing factor, and are able to create energy formed weaponry. [citation needed]

Retrieved from "https://marvel.fandom.com/wiki/Pantheon_(Earth-616)?oldid=5257845"
Community content is available under CC-BY-SA unless otherwise noted.