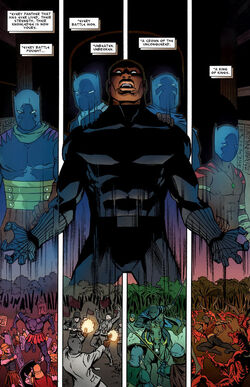 The Panther Cult is the state religion of the African nation of Wakanda.

It's origins date back over 10,000 years ago. After the vibranium meteor fell, a number of Wakandans were painfully mutated into "demon spirits" and began attacking their fellow Wakandans. Bashenga became the first "Black Panther" and closed the vibranium mound to outsiders, forming a religious cult that guarded the mound and fought to keep the "demon spirits" from spreading across the kingdom.[1]

The Black Panther is a ceremonial and religious title given to the chief of the African nation of Wakanda. In addition to ruling the country, he is also chief of its various tribes (collectively referred to as the Wakandans). The Panther Habit is a symbol of office as well as a religious vestment.[2]

As part of the cult's ceremonies, A chosen Black Panther is entitled to the use of a Heart-Shaped Herb that grants the person who consumes it enhanced strength, agility, and perception.[3]

The fallen Black Panthers are sent to rest in the city of Necropolis.[4]

Retrieved from "https://marvel.fandom.com/wiki/Panther_Cult_(Earth-616)?oldid=5860435"
Community content is available under CC-BY-SA unless otherwise noted.