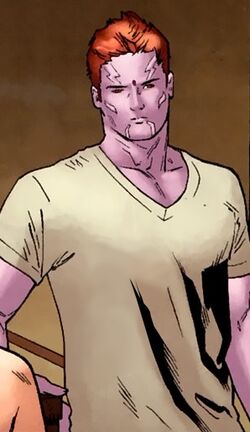 Paras Gavaskar was raised as one of two sons of a wealthy family living in Panchajana outside of Mumbai, India.[3] The Gavaskars were Jainites and raised Paras in the Jain Dharma tradition teaching him to avoid doing harm to any living being.[4]

After his mutant powers manifested, Paras enrolled as a student at the Xavier Institute and moved to the United States. Taking on the codename Indra, he was placed in the Alpha Squadron under the mentorship of Northstar.[5][6]

Alpha Squadron suffered a great loss when Northstar had been killed by the Hand. Karma was assigned as the new adviser Alpha Squadron.[5]

Indra was one of the few students to remain his powers after M-Day.[7] Despite his stance on non-violence, Indra participated in Emma Frost's sparing exercise to determine the roster for the New X-Men.[8]

Indra was among the students captured by Belasco and held in Limbo.[9] When X-23 orchestrated an escape attempt, Indra was beaten badly by S'ym as punishment.[10]

When the students were returned to the Institute, Mercury became interested in determining who was the youngest mutant at the school. Unfortunately, Indra was identified with this dubious honor.[11] Believing that being the youngest mutant meant he was a target, most of the other students, with the exception of Rockslide, began to avoid Indra.[12]

Indra relocated to San Francisco when the X-Men reformed and relocated there.[13][14] During Norman Osborn and H.A.M.M.E.R.'s attack on X-Men, Indra was assaulted by a H.A.M.M.E.R. agent and attacked him in self-defense.[15] Because of his deeply held belief in nonviolence, this incident led to an internal crisis and the loss of his powers.[4] On Utopia, Rogue began counselling Indra. While working through his conflict, Indra made a breakthrough and suddenly transformed, creating psionic armor and weapons vastly different from his original form.[16]

Indra was called home by his parents after his brother fell into a coma. Along with Rogue, Magneto, Loa, and Anole, Indra travelled to Mumbai. Unbeknownst to Indra, his father planned to have him married off in the place of his brother. Indra begrudgingly agreed to marry and leave the X-Men.[3]

Following the battle, Indra decided that the path of non-violence was not the way to stop the evil in the world. Rejecting the wishes of his family, Indra decided to return to the U.S. and the X-Men.[18]

Following the schism between Cyclops and Wolverine, Indra relocated with Wolverine and the other to the new Jean Grey School for Higher Learning in Westchester County, New York.[19]

He relocated to Krakoa alongside many other mutants. There, he was reunited with old friends thanks to the resurrection protocols.[20]

Indra is a mutant with powers including:

Like this? Let us know!
Retrieved from "https://marvel.fandom.com/wiki/Paras_Gavaskar_(Earth-616)?oldid=5821022"
Community content is available under CC-BY-SA unless otherwise noted.