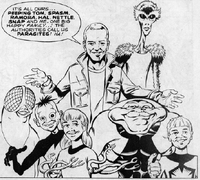 Base of Operations
The Den, London, United Kingdom
Affiliations

The Parasites were Warpies found and gathered by James Christian, known as Uncle Lex, as a thieves army.

He first found Siren and Snap. Being a warpie himself, he was attracted by Siren's powers and rescue them. Slowly, others warpies came to them and formed the Parasites, James training them to the use of his powers and made them became thieves.

Somehow, this last quit the team or was killed (maybe both) by Lex after a conflict.

After a time, Uncle Lex intended to grow his group to form an army under his control.

When the R.C.X. gone-rogue Warpies team Cherubim came to London, he recruited them, but when Snap was crashed by a bus during a robbery and his friends don't look back, the Cherubim decided to quit the team, but Uncle Lex refused them to leave, letting his Parasites battle with them.

Seeing a defeat come, he eventually let them go, stating he had plenty of Warpies to come, thank to Siren's powers. However he was still hoping they will come back, especially Giggles, who had impressioned him and had winkled him before leaving.

The fate of the Parasites is unknown.

Retrieved from "https://marvel.fandom.com/wiki/Parasites_(Earth-616)?oldid=5549519"
Community content is available under CC-BY-SA unless otherwise noted.