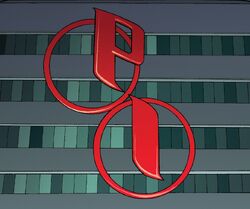 We're not here to build a fortune. We're building the future.

Parker Industries (NYSE: PI) was an American global aerospace, defense, security and advanced technologies company with worldwide interests. It is headquartered at the Baxter Building in Manhattan, New York City. Parker Industries employed thousands people with forty-seven buildings around the world.[1]. The President and CEO of Parker Industries was scientist turned industrialist Peter Parker, who is secretly the super-hero Spider-Man.

After being fired from Horizon Labs, Otto Octavius (who at the time was inhabiting Peter Parker's body) decided to create his own company, Parker Industries.[2] After Otto handed back control of Peter's body to Peter, and the defeat of the Goblin Nation, Peter himself took up the reins to manage the company and publicly announced that he was no longer working with Spider-Man. One of the Peter's first announcements after taking control of the company would be putting its cybernetics project on hold in order to focus on the capture, curing and de-powering of Electro, and to develop a new super-villain prison.[3]

While searching to get energy readings from Electro’s last known location Peter and some employees arrived at the spot which was on fire. After Peter - as Spider-Man - saved everyone inside with the help of fireman Ollie Ollivera, Black Cat stole one of their devices, found Electro with it, and persuaded him to help her get Spider-Man. [4]J. Jonah Jameson's father John Jonah Jameson Sr. became the biggest investor to Parker Industries.[5] Parker Industries was successful in curing Electro after successfully trapping him.[6]

When he was released from prison, Clayton Cole briefly was in the services of Dr. Minerva during her fight with Spider-Man. When Ms. Marvel was seen carrying an Inhuman baby that she has rescued from Doctor Minerva, Clayton turned against Doctor Minerva and helped Kamala Khan. Upon being recognized by Spider-Man, Clayton was offered a job at Parker Industries which he accepted.[7]

Parker Industries competed against Alchemax to determine who will get the contract for the new supervillain prison. Alchemax members Mark Raxton and Tiberius Stone hired Ghost to sabotage Parker Industries.[8]

Over the following months, Otto Octavius (whose consciousness then inhabited the body of the Peter Parker's robotic assistant, the Living Brain) routinely hacked into the systems to manipulate the market in their favor,[9] which saw the expansion of Parker Industries into a global conglomerate with numerous bases in different countries, including England and China. The company became one of the main producers of technology for the general public, including a smart watch called the "Webware." Parker turned his alter-ego of Spider-Man into a guise of his bodyguard, and the Web-Slinger also became the company's mascot. The company also became a tech supplier for S.H.I.E.L.D..[10]

Short time after Hydra's take-over of the United States, Superior Octopus besieged the resources of Parker Industries with the intention of taking back the business he created.[9] Octavius destroyed the offices of the company in London and raided Horizon University in San Francisco. With the Baxter Building shut off from the rest of the world together with the all of Manhattan inside a Darkforce dome, Octavius confronted Spider-Man in what became the last stronghold of the company, its building in Shanghai.[11] All of the locations targeted by Octavius contained the fail-safes of the company necessary to prevent him from accessing to its systems. With Octavius having only one fail-safe left to take care of, Peter decided to resort to a backup plan, and had everyone within the building obliterate all systems and activating a computer worm that would destroy all programs, including the Webware, leaving the company in an irreparable state.[12] The company was eventually dissolved later on.[13]

Like this? Let us know!
Retrieved from "https://marvel.fandom.com/wiki/Parker_Industries_(Earth-616)?oldid=5571859"
Community content is available under CC-BY-SA unless otherwise noted.