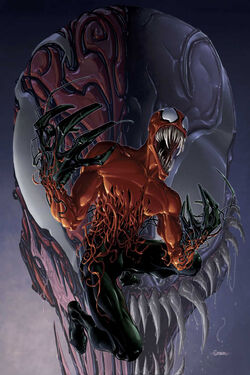 I'm a decent guy. Used to be a cop. Now I've got a crazy symbiote using me as a host. However hard I try to educate it, whatever I do to bring it up properly, it misbehaves. And it brings out the worst in me. It's destroying me. What do I do? What's the answer?

Carnage, about to birth another symbiote, was threatened by its existence and attempted to destroy it. Venom, however, wanted to raise and train the new symbiote as an ally and partner. Weakened by the actual birthing, Carnage was unable to kill the newborn symbiote. Supplanting the symbiote in Patrick Mulligan, a New York City cop, it returned in later days.[5] Venom named the new symbiote Toxin, after himself. Carnage and Venom both knew that because of how powerful Toxin would become in time, and also since his host was a police officer, he would most likely be a hero rather than a villain.[6] Because of this, they made a temporary alliance so that they could kill him but in the end they were defeated. Pat still felt that being bonded with Toxin made him a threat to his wife and newborn son and left them without explanation until he felt he could control the symbiote.[11]

Toxin aided Spider-Man and the Avengers in rounding up many of the escaped convicts from the Raft including, King Cobra, the Wrecker, and the Answer. Pat was specifically tasked by Spider-Man with finding Razorfist and considered it a test of Pat's capability and control over Toxin. During this period Pat struggled to teach Toxin right from wrong and the value of restraint. Pat's attempts were set back by a bout of rage in which he allowed Toxin to kill a criminal for murdering a police officer.[12]

Pat's attempts to hunt down Razorfist were continually waylaid by Toxin's unwillingness to participate, as the symbiote was still unclear on the complexities of moral thinking. Pat's attempted suicide over his broken life cause Toxin to consider his feelings more, leading to Toxin shapeshifting into an alter ego named Larry to interact with Pat's wife and son. Toxin then made this kindness into a deal. In exchange for continuing this service, Pat would 'black out' and allow Toxin two hours of freedom to do as he wished, so long as there was 'no arson, no grand larceny and no homicide.' This continued for some time. During one of these blackouts, Toxin read Pat's laptop diary entries and destroyed the device when he became upset about Pat's opinion of him, specifically calling him a monster. When stealing a replacement in a misguided attempt to do the right thing, Spider-Man defeated Toxin and repeated his request for Pat to catch Razorfist, berating him for letting Toxin 'run wild.'[11]

After torturing his address out of Pat's ex-partner, Razorfist made an attempt to kill Pat in his own home but instead found his father who was killed in the struggle. Razorfist escaped whilst Pat checked on his father. Whilst discussing the possibility of killing Razorfist Pat said to Spider-Man "If I cross that line... throw me in Riker's and throw away the key."[13]

Toxin defeated Razorfist, and despite Razorfist's taunts, he refused to kill him, finally gaining control of the beast inside him. Pat then got back together with his estranged wife, Gina, and told her about Toxin and about the reason he had left her.[10]

Pat was ultimately killed by Blackheart and his symbiote taken away to the Devil's Den, a casino Blackheart had opened in Las Vegas. The symbiote was later stolen by Jack O'Lantern and Venom, but not before Blackheart used it to create his Symbiote Warriors and taken a piece of its flesh to use in a satanic ritual.[14]

When Patrick was bounded to the Toxin Symbiote, he possessed some of the same powers of Venom and Carnage but to a higher level. At the moment of his death, he was separated from it, making him die without its powers.

He was a police officer and has had formal training.[10] His fighting prowess equals that of Spider-Man.[16][17]

Like this? Let us know!
Retrieved from "https://marvel.fandom.com/wiki/Patrick_Mulligan_(Earth-616)?oldid=6105540"
Community content is available under CC-BY-SA unless otherwise noted.