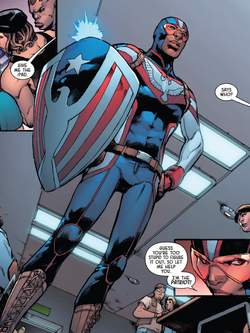 When Steve Rogers revealed himself to be Hydra and seized firm control of the United States of America thanks to the S.H.I.E.L.D. Act, Rayshaun Lucas ended up getting a secret file which explained what Kobik had done to rewrite Captain America's history. Shaun reached out to the Underground and he gave the files to the Tony Stark A.I..[2]

To thank Shaun for restoring his hope, Tony grabbed Shaun's designs for a new Patriot and built him a new shield that is also a glider and a drone.[3]

Like this? Let us know!
Retrieved from "https://marvel.fandom.com/wiki/Patriot%27s_Shield?oldid=6431944"
Community content is available under CC-BY-SA unless otherwise noted.