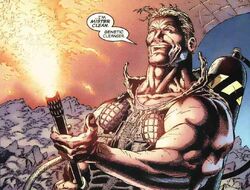 Mister Clean was chemically treated that made his skin so hard that even Wolverine's Adamantium claws couldn't do real damage to him. However, despite this he could still be burned.

Like this? Let us know!
Retrieved from "https://marvel.fandom.com/wiki/Paul_Botham_(Earth-616)?oldid=5884148"
Community content is available under CC-BY-SA unless otherwise noted.