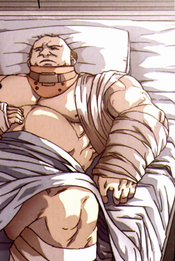 Paul Brokeridge got enhancements from a new Power Broker, giving him an immense physique and strength. Paul then joined the Unlimited Class Wrestling Federation but suffered an intense injury, leaving him immobile. Angry over how this was affecting his family, Roger tried to work up the courage to kill him and end their familial suffering, but he ultimately couldn't do it.[1]

Like this? Let us know!
Retrieved from "https://marvel.fandom.com/wiki/Paul_Brokeridge_(Earth-616)?oldid=6461810"
Community content is available under CC-BY-SA unless otherwise noted.