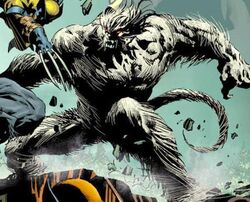 As the Wendigo, Cartier was several feet taller than the average human and vastly more muscular. He was covered with snowy white fur, had a long tail, razor sharp teeth, and claws on his hands and feet.

The Wendigo is unable to change back until the curse is lifted from its host.
Origin
Origin
Human transformed into a Wendigo
Reality
Earth-616
Creators and Appearances
Creators
Steve Englehart, Herb Trimpe
First Appearance
Incredible Hulk #162
(April, 1973)

Hulk is Hulk -- not Wendigo. Hulk doesn't even know what Wendigo is. And Hulk doesn't hurt people who don't hurt him.

The Wendigo is the result of an ancient curse laid down by Elder Gods of Canadian folklore that transforms any person who eats the flesh of another human being in the Canadian wilderness into a massive, fur-covered humanoid beast.[1] Wendigo is an indestructible force of nature, having been made by the gods.

In the first modern documented case of the Wendigo, three Canadians, Paul Cartier, Georges Baptiste and Henri Cluzot, were hunting in the Canadian North Woods when wolves attacked them. Cluzot was mortally wounded, and his friends took him inside a cave for shelter. As the man began to starve, Cluzot died. Cartier, on the verge of insanity, resorted to eating the dead man's flesh. In doing so, he fell victim to the curse that transformed him into the Wendigo. Cartier's sister Marie discovered her brother's fate because The Hulk decided to help her find her missing brother; the Hulk found Baptiste instead and proved unable to help Cartier.[1]

Ultimately, Baptiste and Marie attempted to transfer the curse to the Hulk, with whom Cartier had clashed several times as the Wendigo. Marie tranquilized the Hulk, then summoned the Wendigo. But before she could begin the necessary ritual, the Hulk awoke and attacked the Wendigo. In the midst of their battle, they were confronted by Wolverine, who had been sent by the Canadian government to subdue the Hulk.

Wolverine and the Hulk together took down Wendigo, but fought each other as Marie prepared the Wendigo for the transferal process. She then gassed the two combatants, reverting the Hulk to his human form of Dr. Bruce Banner. Seeing Banner, Baptiste lost all resolve to help Marie transfer the curse to the Hulk. Marie tried to move Banner away, but he reverted back to the Hulk and renewed his fight with Wolverine. Unseen, Baptiste snuck into the cave in which the Wendigo lay and completed the ritual, which transferred the curse from Cartier to himself, transforming him into the Wendigo.[2]

Paul Cartier himself had no superhuman abilities after the curse of the Wendigo from removed from him.

As the Wendigo, the sheer scope of his physical attributes coupled with his feral nature made Cartier a highly formidable combatant.

Although Cartier didn't age and was immune to disease and injury as the Wendigo, it was possible for him to be killed, if he were decapitated or if his heart were removed.

Like this? Let us know!
Retrieved from "https://marvel.fandom.com/wiki/Paul_Cartier_(Earth-616)?oldid=4978627"
Community content is available under CC-BY-SA unless otherwise noted.