For fictional versions of Paul Jenkins as a character within comic books and/or other media,
visit this disambiguation page.
Paul Jenkins 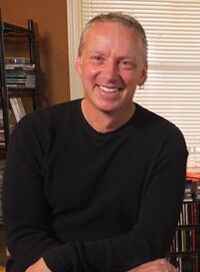 Paul Jenkins is a British comic book writer, who has primarily worked for Marvel Comics. He was the writer of The Spectacular Spider-Man Vol.3 for most of its three year run and he has also written The Incredible Hulk and Wolverine for Marvel.

He and artist Jae Lee were responsible for a critically acclaimed and commercially successful Marvel Knights series Inhumans for which the writer received an Eisner Award. Jenkins and Lee are also responsible for The Sentry, a Miracleman-like hero that was the subject to both a Marvel Knights limited series and a marketing hoax. The character was a member of The New Avengers (which occurred in a storyline with a cameo by Jenkins himself). But is now a Horsemen of Death.

In 2001 he collaborated with penciller Andy Kubert on the 6-issue limited series Origin which for the first time revealed Wolverine's beginnings. The title was one of the biggest sales successes of that year for Marvel, and Jenkins has written Wolverine: The End, a story dealing with loose ends from the story, although it is not a direct sequel, as Marvel's The End stories are not canon. There is to be one more sequel to Origin.

Recently, Jenkins wrote the The Sentry with artist John Romita Jr.. Jenkins is also a prolific creator in the video game medium, having worked on several top-tier titles including the Legacy of Kain, Twisted Metal Black and God of War series. Most recently, Paul is credited as writer on Incredible Hulk: Ultimate Destruction, created with Radical Entertainment.

Retrieved from "https://marvel.fandom.com/wiki/Paul_Jenkins?oldid=6546585"
Community content is available under CC-BY-SA unless otherwise noted.