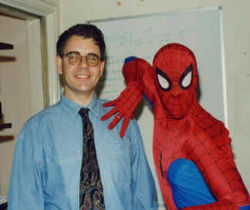 Paul Neary began his career in comics at Warren Publishing in the 1970's before working with Dez Skinn at Marvel UK, where he wrote and/or drew several strips for Hulk Comic (Neary has at one time or another been a writer, penciler and inker, as well as an editor) and later wrote the 'Timesmasher' series in Rampage Magazine. He eventually became Editor-in-Chief of Marvel UK. Around the same period that he was initially working for Marvel UK, he also freelanced for 2000AD.

In the 1990's, Neary masterminded the expansion of Marvel UK and the launch of titles such as Hell's Angel, Motormouth and Killpower and Digitek. In recent years however, he has been primarily an inker, working on, among other things, The Ultimates.

Like this? Let us know!
Retrieved from "https://marvel.fandom.com/wiki/Paul_Neary?oldid=4679695"
Community content is available under CC-BY-SA unless otherwise noted.