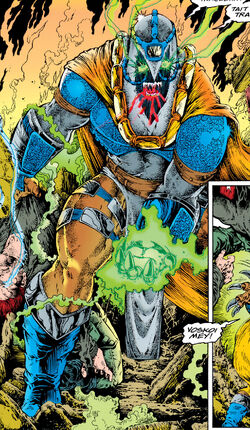 Mystic champion of the Dudak, an oppressed ethnic minority in the nation of Slorenia, Ember’s power was contained within a mystic triptych, crafted over a thousand years ago. When touched by a Dudak, they would become transformed into Ember. Thousands of years ago, a racial feud between the Slorenes and the Dudaks turned into an eternal conflict when it became "infected with mystical power. Now neither side can win. As one side grows in power, the other shrinks...then the balance is reversed. Until one side lays down it’s arms, they are doomed to bloodshed!" "That which does not truly live, cannot die. Ember is the immortal champion of the Dudak people."

Pavel Chenklo, a Dudak historian, had come to the Slorenian Winter Palace to catalogue the art treasures held there after the fall of the communist dictator, and found the Ember Triptych, and was transformed into Ember. Sensing an overwhelming disaster set to befall his people, Ember had set out to prevent this by slaughtering the Slorenes.

Ember killed Slorene soldiers evacuating peasants from the Tblunka, the Slorene capital. As Force Works flew to Slorenia to try and stop the civil war, Ember shot down their jet, and the two Slorene Migs escorting it. Force Works found Ember waiting for them, having slaughtered an entire Slorene army unit. US Agent attacked him, only for Ember to absorb the energy from his photon-shield. Ember swiftly defeated all of the team except Iron Man, who managed to hurt him with a phased plasma stream. Ember blocked Iron Man’s attack with his own mystic energy blast, which overloaded Iron Man’s systems, and escaped while his foes were unconscious.

Told by the Slorene government that Ember was the cause of the crisis in Slorenia, Force Works and Black Brigade managed to locate Ember, in the abandoned Winter Palace of Slorenia’s overthrown communist dictatorship. Once there, they split up to search, and Ember leapt from the shadows of the vaults under the palace to attack US Agent and Scarlet Witch, but was less powerful than before, and easily defeated. He reverted to his human form, surrendered, and explained who he was and how he had become Ember. Realizing that Ember’s actions may be the very cause of the disaster he sought to prevent, Chenklo planned not to use the Triptych to renew his strength, but to destroy it so the power could not be misused again. Before he could do so, Black Brigade and Iron Man’s fight broke through to the vaults, and seeing the foe he was searching for, Black Brigade opened fire on Chenklo, and the vault floor collapsed, sending Chenklo falling to his apparent death. [citation needed]

Locomotive Breath of the Rush Club manipulated War Machine into helping him break into the Winter Palace, where he found the Ember Triptych, planning to use it as a power source to restore his strength. Opening it, it’s power seemingly overwhelmed and destroyed him, and shortly afterward, Ember was reborn, his body solidifying out of the mist. It is unknown if Ember had taken Locomotive Breath’s body as his own, or if he was truly destroyed. Breaking into the Parliament Compound’s underground chamber, he confronted Volkvhy, the Slorenian champion, and killed him in battle, draining the power and life-force from him, vastly increasing his own power, an act which Dr Renko claimed had happened countless times before, and would lead to a reversal of the balance of power in Slorenia, and Ember’s rule would be as bloody and tyrannical as Volkhvy’s. Scarlet Witch tried to reason with Ember, wanting to speak to Chenklo, but Ember, for the first time displayed the ability to speak English, claimed there was no Chenklo within him, "no one but Ember.", and attacked the members of Force Works present, trapping them in an energy field, planning to use them to feed him. Iron Man arrived, ordered him to release them, but Ember shot him down with an energy bolt. Then Century teleported in behind Ember, striking him into the pod-bank of the Program, Volkhvy’s life-force draining machine. Spider-Woman trapped him there with her psi-webs, and US Agent activated the Program, which, not designed to handle the amount of power Ember contained, overloaded and exploded, destroying the entire building, and apparently killing Ember. [citation needed]

As Ultron and his robotic armies invaded Slorenia, Ember rose again, attacking Ultron himself, only to be seemingly destroyed by Ultron’s energy blast.[1]

Ember possessed superhuman strength, and could fire blasts of mystic energy, form energy-claws over his hands, and absorb certain forms of energy. An aura of intense cold surrounded Ember. Ember’s power needed frequent recharging from the Ember Triptych, or he would revert to human form. Ember was able to drain the energy and life-force from his opposite number, Volkhvy, and his powers were greatly enhanced once he had slain his foe. In this state, he trapped his foes in an energy field, a power he had not previously displayed.

Like this? Let us know!
Retrieved from "https://marvel.fandom.com/wiki/Pavel_Chenklo_(Earth-616)?oldid=5834380"
Community content is available under CC-BY-SA unless otherwise noted.