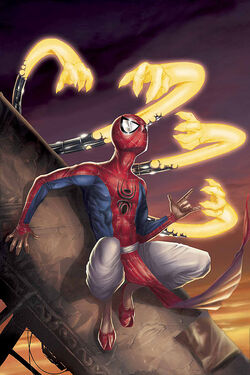 Pavitr, you are Spider-Man. You're a hero wherever you are and whoever is by your side. And that other fella? Who's to say he's not a pale reflection of you?

Pavitr Prabhakar, a poor Indian boy, lived in a village, but moves to Mumbai with his aunt Maya and uncle Bhim to study after getting half a scholarship. His parents died some years ago. Other boys at the school tease him and beat him. He knows his uncle Bhim is struggling to support him and his aunt Maya, and pay the school. Only Meera Jain, a girl from school, befriends him. Meanwhile, Nalin Oberoi, a local crimelord, uses an amulet to perform an ancient ritual, where he gets possessed by a demon committed to opening the gate for other demons to get back to Earth. While being chased by other kids, Pavitr encounters an ancient yogi who gives him the power of a spider, to fight the evil that threatens the world. While discovering his powers, Pavitr refuses to help a woman being attacked by several men. He leaves the place, but comes back when he hears his uncle's cry, who was stabbed when he tried to help the woman. Thus Paviitr understands that with great power comes great responsibility.

Next, Nalin Oberoi becomes human again, transforms his doctor into Doctor Octopus (without the usual mechanical arms, he has demon arms that look's similar to his mechanical arms), and sends him to kill Spider-Man, as instructed by the demon voices. Doc Ock fails, and Spider-Man makes it to the newspapers, where he is deemed a threat.

Oberoi kidnaps Pavitr's aunt, taking her to a refinery outside Mumbai. There he betrays Doctor Octopus, blasting him away with a ray. Spider-Man arrives and fights Oberoi, who has also kidnapped Meera. He lets both aunt Maya and Meera fall. Spider-Man dives for his aunt, but then fails to rescue Meera, who is saved by Doctor Octopus, that is just coming back to exact revenge on Oberoi. Pavitr reveals his identity to Meera and asks her to take his aunt away.

Oberoi gets rid of Doctor Octopus for good, and touches Spider-Man with the amulet. A Venom-like creature tries to take Spider-Man to the dark side, but he remembers his uncle and rejects the evil. By doing so, the link between the demons and Oberoi is shattered, and he becomes human again.

Everything goes back to normal, Spider-Man gets the girl, and celebrates the Diwali, the Hindu festival of lights, with his aunt.

Some time later, Spider-Man was encountered by Superior Spider-Man (Otto Octavius), who saves him from certain death by Karn. He joined the team of Spider-Men from many dimensions to battle the Inheritors.[2]

Upon arriving in Earth-3145 and meeting this reality's Ben Parker, Pavitr suffered an existential crisis regarding to the overwhelming number of similarities between himself and the other Spider-Totems, especially the Peter Parker of Earth-616, in which Pavitr felt like he and the others are echoes or distorted reflections of the Earth-616 Peter, and therefore expendable in the coming battle against the Inheritors. However, his worries were refuted by Spider-UK, who stated that each Spider-Man is unique and special in their own way.[3]

Like this? Let us know!
Retrieved from "https://marvel.fandom.com/wiki/Pavitr_Prabhakar_(Earth-50101)?oldid=6121389"
Community content is available under CC-BY-SA unless otherwise noted.