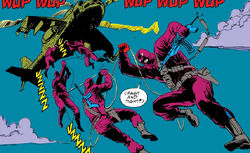 The Peace Corpse was a group of Russian terrorists who, in order to promote financial growth through war, over-took the British nuclear submarine the Waterwind. The Avengers were called in to diffuse the situation which was made more difficult by confrontations with the People's Protectorate and the Atlanteans. The sub was damaged and surfaced off the coast of Newfoundland. The situation now being in Canadian territory, jurisdiction passed on to Alpha Flight. While the combined heroes did almost stop the Peace Corpse, the leaders, Illyich Prokvitch and Strokov wired themselves into the nuclear payload. When the Vision and Vostok cut the connection, a failsafe was activated and a nuclear explosion ensued. [1]

Shaman was able to shunt the affected area into his pouch. Once there, Prokvitch and Strokov became a being known as the Combine and threatened to destroy everyone. It was only when the other Peace Corpse members joined the Combine that they were able to sway that opinion and save the entire group of people by absorbing their irradiated energy. [2]

Equipment: The Peace Corpse had access to a variety of military weapons.

Retrieved from "https://marvel.fandom.com/wiki/Peace_Corpse_(Earth-616)?oldid=3939528"
Community content is available under CC-BY-SA unless otherwise noted.