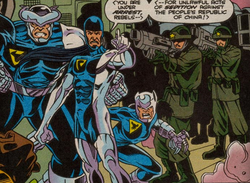 The People's Protection Agency is China's equivalent of America's Project Wideawake. It's mission is to find, remove, contain, and control the growing mutant population within the People's Republic of China. In addition to having soldiers equipped with high-tech weaponry and the artificially-enhanced China Force, they have a satellite relay network with scanners that can track mutagenic signatures. Reignfire of the Mutant Liberation Front betrayed the Chinese mutant dissident group 3Peace to them as an alliance with the People's Protection Agency was beneficial to Reignfire, though the 3Peace members were able to escape the ambush.[1]

Like this? Let us know!
Retrieved from "https://marvel.fandom.com/wiki/People%27s_Protection_Agency_(Earth-616)?oldid=5549564"
Community content is available under CC-BY-SA unless otherwise noted.