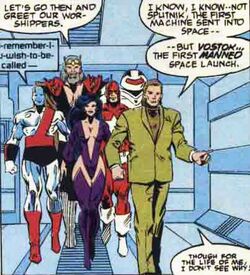 Base of Operations
Moscow, Russia
Affiliations

The People's Protectorate (Russian: Народный протекторат) are a government sponsored team of extraordinary individuals with special abilities. They fight for the people of the Russian Federation and their interests around the globe. The team is formed from members of the Soviet Super-Soldiers after the fall of the Soviet Union and the end of the Cold War.[1]

When the Russia-based terrorist group Peace Corpse seized control of the British submarine, the Waterwind, the Protectorate was sent to intervene. They encountered the Avengers and claimed responsibility for handling the matter. [2] The two teams settled their differences in order to fend off an attack by Tyrak and other Atlanteans.[3]

When the Waterwind moved into Canadian waters, the Protectorate were somewhat hasty about letting Alpha Flight take control of the situation, as they doubted their experience. [4]

A nuclear explosion did take place accidentally due to the actions of Vostok and the Vision.[5] Shaman was able to shunt the entire area affected by the explosion into his pouch. While lost in the otherdimensional worlds contained in Shaman's pouch, Alpha Flight, the Avengers and the People's Protectorate faced the Combine; an amalgamous being of the two leaders of the terrorist group who wanted to create war on earth to promote financial growth. The Combine was eventually won over when the other terrorists joined it and all that was affected by the explosion was returned to earth, leaving the Combine to explore the various dimensions in Shaman's pouch.[6]

The Protectorate later merged with Siberforce to become the Winter Guard.[7]

Equipment: The Protectorate had access to Russia's military resources.

Chronologically, their first appearance as the People's Protectorate was in Avengers #319, but their origin was told later. This has lead to some discrepancies;

This could be explained fairly easily by saying that the team was re-named prior to the Soviet Super Soldiers special (thus explaining the new name in their Avengers appearances) but that the other changes had not yet been implemented.

Retrieved from "https://marvel.fandom.com/wiki/People%27s_Protectorate_(Earth-616)?oldid=5130192"
Community content is available under CC-BY-SA unless otherwise noted.