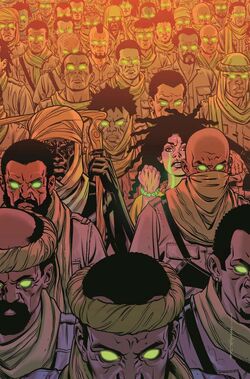 The People is an insurgent Wakandan force led by Tetu. They allied themselves with Zenzi and the Nigandan Army, to overthrow the king Black Panther. Zenzi's powers were used to incite riot among the Wakanda miners and the military.[1]

After failing to recruit the revolutionary Dora Milaje to their cause, Tetu and the People resorted to Ezekiel Stane, who raised the stakes of the People's war with the deployment of suicide bombers equipped with repulsor technology.[2]

In an effort to defame the Black Panther, the People broadcast a video of Genoshan leader Jorick Kroawl, who had advised the king to take immoral measures to contain the revolution, while purposely omitting the mention that that Kroawl's idea had been rejected by the king.[3]

With the help of Kwabena Ware, a former rebel convinced to deflect the People, Black Panther located the base of the People and attacked it, but allowed his enemies to apprehend him. While captured, Black Panther recorded Stane revealing Tetu's promise to divide Wakanda with whichever villains that came to his aid, which included the Fenris Twins, and broadcast it to discredit the People's cause.[4] Many of the People's men were subsequently taken down by the ensuing ambush carried out by the Crew to rescue Black Panther, a turn of events that prompted Stane and Fenris to teleport away.[5]

Black Panther and his allies tried to hold the line, but Tetu's powers and the perseverance instilled in his soldiers by Zenzi proved to be too strong. The People's numbers were greatly diminished when Black Panther had the old scholar Changamire speak out against Tetu's actions and broadcasted it through the Kimoyo Beads, breaking Zenzi's hold over numerous soldiers. Tetu ordered her to use those who remained on their side to murder those that were about to defect. She then empowered the remaining soldiers, turning them into mindless brutes that managed to break T'Challa's final line of defense and break into the city.

When he delved deeper into the Golden City, Tetu found himself and his soldiers outnumbered by Black Panther, his allies, and the manifestation of the souls of the Necropolis, which included all past Black Panthers. Tetu's soldiers were swiftly subdued and returned to their human forms, while Tetu was taken down by T'Challa. Manifold subsequently teleported Tetu away, and he was imprisoned, being guarded by other shamans. Zenzi had remained behind, which allowed her to avoid capture.[7]

Retrieved from "https://marvel.fandom.com/wiki/People_(Earth-616)?oldid=5549556"
Community content is available under CC-BY-SA unless otherwise noted.