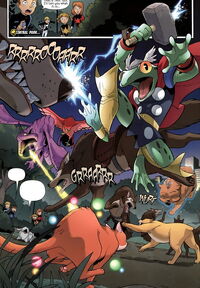 The history of this incarnation of the animal-superhero team known as the Pet Avengers most likely mirrors that of their Earth-616 counterpart.

As part of his grand plan to trick Power Pack into going to Asgard and get the Golden Apples of Idunn for him, Loki send a pack of Wargs to attack the Pet Avengers in Central Park. Power Pack noticed the battle while on the roof of the hospital in which their Grandmother was hospitalized, and came to the Pet Avengers aid. Together they were able to subdue the Wargs. With the Wargs now under their command, Throg used his powers to open a gateway to Asgard for Power Pack.

Later, when Loki's plan accidently set Ragnarok in motion and awoke the giant serpent Jormungand, the Pet Avengers travelled to Asgard to aid Power Pack and Thor in battle against the monster.

Retrieved from "https://marvel.fandom.com/wiki/Pet_Avengers_(Earth-5631)?oldid=5549573"
Community content is available under CC-BY-SA unless otherwise noted.