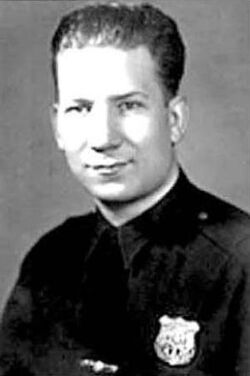 Peter Morisi was born and reared in the Park Slope neighborhood of Brooklyn, New York City, Morisi was educated at the School of Industrial Art and the Cartoonists and Illustrators School, both in Manhattan.

He also worked as a New York City police officer.[1] In 1956, Morisi fulfilled a childhood dream of joining the police force, and became an NYPD cop stationed in Brooklyn and in lower Manhattan. To avoid the department knowing he was moonlighting, however legally, Morisi began signing his work only with his initials – PAM, the "M" rendered without connectors, as "

Like this? Let us know!
Retrieved from "https://marvel.fandom.com/wiki/Pete_Morisi?oldid=6837665"
Community content is available under CC-BY-SA unless otherwise noted.