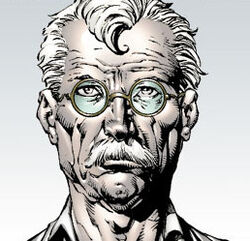 Peter Alraune was an archaeologist and father to Marlene Alraune. Many years ago, Peter led an expedition to excavate the tomb of Pharaoh Seti II in the Valley of the Kings. After five years of digging, Alraune's efforts revealed a secret chamber containing vast riches and a statue of the Egyptian God of vengeance, Khonshu. During this time, a band of mercenaries led by Raul Bushman raided the area seeking to claim Alraune's treasures for themselves. Among Bushman's confederates were Jean-Paul Duchamp and Marc Spector.[1]

As a way of persuading Marlene to tell him where the tomb was hidden, the Bushman killed Peter, leading to Spector punching the Bushman in the face and setting him on a course that would ultimately lead him to becoming the super-hero Moon Knight.[1][2]

Like this? Let us know!
Retrieved from "https://marvel.fandom.com/wiki/Peter_Alraune_(Earth-616)?oldid=5177241"
Community content is available under CC-BY-SA unless otherwise noted.