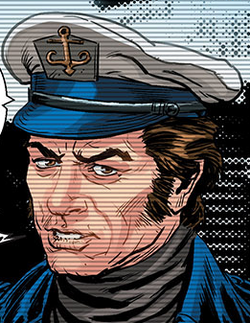 Peter Corbeau was a brilliant man who gained a scholarship to Pennsylvania State University. It was there he met fellow genius Bruce Banner and the two became room mates.[1] An old friend of Charles Xavier,[2] and is the creator of Starcore One.[1]

He also was a lead reseacher on a NASA project, where they researched and performed experiments on the Cavorite crystals. The ultimate goal of the project was to try to harness the power of the Cavorite, it would have allowed them to build a faster than light stardrive, it was based in the Lunar Receiving Laboratory in Houston. Carol Danvers also worked at the laboratory as a security officer.[3]

Peter Corbeau became a world-renowned physician, Nobel Prize winner. When the Hulk was captured by the army with tranquilizer bombs and taken to Dr. Corbeau. He used a device that manipulates the sun's energy, thus neutralizing the gamma rays in Hulk, curing Dr.Banner. Meanwhile, Jarella is sent to Earth by her wizards in search for her lover, the Hulk. She needs him by her side to defeat the tyrant Lord Visis. Somehow, Corbeau's process and Jarella's appearance caused an adverse effect in the sun, threatening its very existence. Instead of sending the princess back to her microscopic world, the army creates a replicate. But before they send it, Visis sends Fialan the assassin to kill Jarella. Hulk fights Fialan but an explosion kills Jarella's replicate. The green monster thinks the girl is dead and smashes Fialan. When Jarella appears, the army uses gas to knock the Hulk out, and the princess is sent willingly back to K'ai.[1]

Like this? Let us know!
Retrieved from "https://marvel.fandom.com/wiki/Peter_Corbeau_(Earth-616)?oldid=5187036"
Community content is available under CC-BY-SA unless otherwise noted.