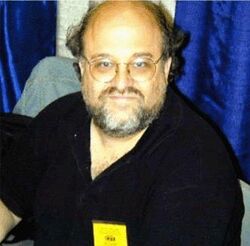 Peter David enters the world of comics as a sales manager for Marvel and for three years tries in vain to sell his stories. The turning point came in 1985 thanks to publisher Jim Owsley (now known as Christopher Priest) who bought a Spider-Man story created by him.

David therefore obtains great success with audiences and critics with the saga of Jean DeWolff's death. From that moment on, his career took off, and he quit his job as a sales manager to devote himself full time to writing.

The pinnacle of his career reaches him thanks to The Incredible Hulk, a series he has worked on for more than a decade and which makes him win numerous awards.

David has written several comic series dedicated to the novels of Stephen King and Edgar Rice Burroughs, as well as the X-Factor series.

Like this? Let us know!
Retrieved from "https://marvel.fandom.com/wiki/Peter_David?oldid=6546603"
Community content is available under CC-BY-SA unless otherwise noted.