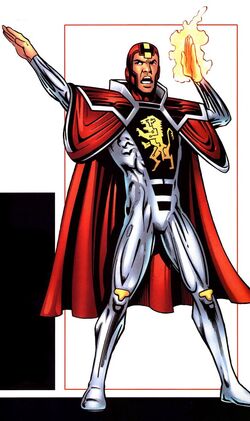 Peter Hunter has been an agent of the mystical entity known as the Green Knight since World War I, when he was given the Pendragon spirit formerly bonded to Herne the Hunter and became the superhero Albion. For decades, he fought the forces of the Bane, but eventually retired and became a history teacher.[1]

When the Bane launched their latest major incursion into Britain, Hunter was called out of retirement, imbued with the Pendragon spirit of Merlin, and joined the Knights of Pendragon. Though his powers had in any case dramatically slowed his aging over the years so that he appeared to be only in his sixties, once he became Albion again, Hunter was transformed back into a young man. Albion became the leader of the Pendragons and is one of the few to have remained active with the team after most of them left.[2]

In the Gaelic tongues, variants of Albion are the name for Scotland.

Like this? Let us know!
Retrieved from "https://marvel.fandom.com/wiki/Peter_Hunter_(Earth-616)?oldid=6525421"
Community content is available under CC-BY-SA unless otherwise noted.