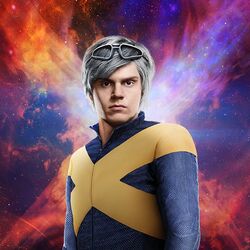 You know, for a guy who moves as fast as me, I always seem to be too late.

Peter Maximoff is a mutant who by 1973 had expressed a power to move at incredibly high speed. Turning to a life of thievery, Peter soon became a person of interest to the authorities as he stockpiled numerous stolen goods in his mother's basement.

He was met at his home one day by Charles Xavier, Logan, and Henry McCoy, who approached him with a proposition to break another mutant out of maximum security detention below the Pentagon. Accompanying the trio, Peter's part in the mission was to penetrate deep into the facility unseen and undertake the physical act of extricating Magneto from a subterranean cell while the others followed to aid with the extraction. Peter's speed came in handy when the alarm was raised and a group of guards opened fire on the escaping group. He simply donned his goggles and raced around the room, spoiling the aim of the shooters, moving their arms to strike themselves or each other, and then casually adjusting the trajectories of any bullets with a flesh target in their path.

When his mission was done, he said his goodbyes to the others as they left him at his home. He watched them again later on television as they foiled incidents that would have ramifications on a global scale.[1]

Ten years later, Peter was still living in his mother's basement. But when he sees news that Magneto - who Peter has learned is his father - had broken loose, Peter decides to go after him. Using Xavier's business card he took a decade prior, Peter goes to the X-Mansion, arriving just as an explosion is ignited in the basement; using his powers, Peter runs inside the crumbling house and saves everyone bar the one that caused the incident, Havok, because he was too close to the blast. Afterwards Col. William Stryker arrives in a helicopter, and takes Peter as one of his mutant hostages to the Weapon X facility in Canada.

Three of Xavier's students, Scott Summers, Jean Grey, and Kurt Wagner, helped break Peter out of Stryker's captivity. Peter was then among the X-Men who went to Egypt to save Xavier from Apocalypse. He used this opportunity to talk to Magneto, who had become a Horseman of Apocalypse, to convince him to abandon Apocalypse's civilization-destroying plans. Afterward, Peter took on Apocalypse himself with his superspeed, but it resulted in Apocalypse trapping him and breaking his foot. In the end, however, the X-Men were victorious in defeating Apocalypse.

Sometime later, Peter witnessed his father and Jean rebuild the X-Mansion. After Egypt, Peter officially joined the X-Men and was seen training in the Danger Room.[2]

Nearly a decade later, in 1992, Peter and his fellow X-Men rescued a crew of astronauts about to be hit by a solar flare. While Peter and Kurt were able to rescue most of the astronauts, Jean stayed behind and absorbed most of the solar flare's impact. She miraculously survived and the X-Men returned to Earth as American heroes.

Later, Jean and her powers began spiraling out of control due to the solar flare she absorbed, so the X-Men confronted at her childhood home. The X-Men proved to be no match for Jean's new-found strength, as she critically injured Peter and accidentally killed Mystique. Peter was confined to the X-Mansion to recuperate, as the rest of the X-Men attempted to save Jean from herself.[3]

Superhuman Speed: Peter's body operates at extreme high speed. His running speed is considerably faster than the projectile velocity of a bullet fired from a 9mm pistol. Because he moves faster than the human eye can normally register, he often gives others the impression that he can teleport. Aside from being fast enough to casually shift the trajectory of bullets in flight with the touch of a finger, he has also demonstrated the ability to shatter a thick sheet of glass by vibrating his hands at its simple harmonic frequency. His brain also works at a high-speed, making everything seem to be in slow-motion to him.[1]

Peter uses various common items to aid him in his escapades, which can be adapted to a variety of purposes beyond their intended design due to the speed at which he can use them. Among his tools are a pair of goggles, a stereobelt and a roll of duct tape.

Like this? Let us know!
Retrieved from "https://marvel.fandom.com/wiki/Peter_Maximoff_(Earth-TRN414)?oldid=6415968"
Community content is available under CC-BY-SA unless otherwise noted.